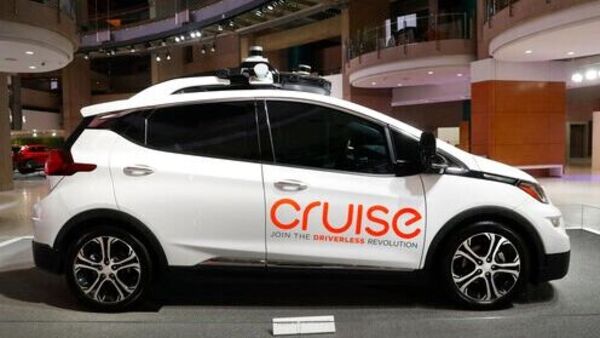 Cruise AV, General Motor's autonomous electric Bolt EV is displayed in Detroit. Autonomous vehicle taxis are up and running in San Francisco and the public has been invited to try one out.

General Motors backed autonomous vehicle company Cruise is opening up its driverless taxi service in San Francisco, California, for the public. The company is asking interested people to sign up for a free driverless ride and experience what it feels like to ride in a vehicle that drives itself.

The company is starting with a small bunch of users for now and will ramp up the facility as it will make more cars available. Each car has a unique moniker such as ‘Tostada’, ‘Disco’ and ‘Sourdough’. The vehicles have been in testing phase for several weeks by GM employees. Recently GM CEO Mary Barra also took her first driverless ride in a Cruise vehicle and shared a positive feedback.

A YouTube video of Barra taking a ride in ‘Disco’ has been posted by Cruise on YouTube. She said that sitting in the driverless car was one of the highlights of her career. “I feel like we’re making history," Barra told Vogt, as per the video. She noticed the amazement of the occupants of other vehicles on the road and of passersby upon seeing them ride without a driver.

The milestone achieved by Cruise has led to an $1.35 billion investment from Softbank, which had already put $900 million into the company, Interim Cruise CEO Kyle Vogt shared in a blog post. He added that additional capital will allow the company to grow its work force and scale up the driverless technology in San Francisco and into other cities.

Cruise claims that it is the only autonomous vehicle company so far to get permission to offer rides to the public in driverless cars. The blog post also says that it is the only company to apply for a permit to charge for the rides, though that hasn't yet been approved. However, it is not yet clear when they expect to be fully operational and start charging for rides.