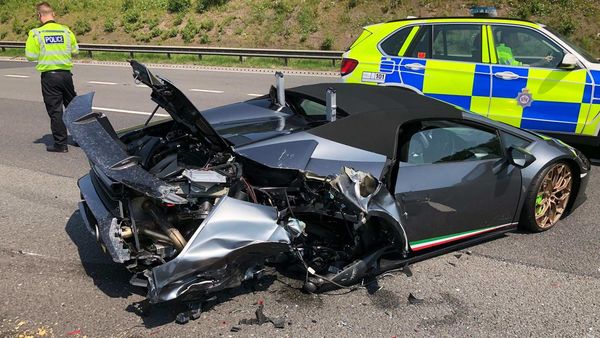 Imagine saving up to buy a luxury Lamborghini sports car and seeing it get wrecked barely 20 minutes after owning the dream car. This was the unfortunate fate of a brand new black Lamborghini Huracan driver.

The luxury car, worth about £200,000 (nearly ₹1.9 crore), was destroyed in a crash on the M1 motorway in West Yorkshire, England, BBC reported. The West Yorkshire Police said that the 20-minute old brand new car had stopped on the lane due to mechanical failure and was hit from behind by 'an innocent motorist', leaving the car in a terrible state.

M1 Ossett today - It’s only a car ! But on this occasion a 20 minute old brand new Lamborghini that stopped due mechanical failure in lane 3 them hit from behind by an innocent motorist #couldhavecried pic.twitter.com/S1f9YEQGcD

After being called to reports of a two-vehicle collision near the M1 junction, police officers had shut the motorway in order to inspect the situation. The destroyed Lamborghini and the van that hit it, were both removed from the scene to clear the motorway for traffic, local media reported. The driver of the van suffered head injuries due to the collision.

The driver of the expensive Lamborghini has not been immediately identified and it is also not yet figured where the car was bought from.

The West Yorkshire police posted pictures of the wrecked car saying, "It's only a car!" They used a hashtag - #couldhavecried. Users of the micro-blogging site have criticised the police for calling the driver of the van 'innocent'.

"them hit from behind by an innocent motorist "

No need for any trial then.

Replies on the tweet read, "No need for any trial then?", "Failing to stop before hitting something clearly in the road isn’t 'innocent'" and "Ploughing into people from behind is OK now is it?"