Woman crashes Aston Martin worth half a million dollars, leaves owner behind

It's not everyday that someone smashes a car worth a fortune and walks away without looking back.
By : Sabyasachi Dasgupta
| Updated on: 20 Jun 2020, 02:26 PM 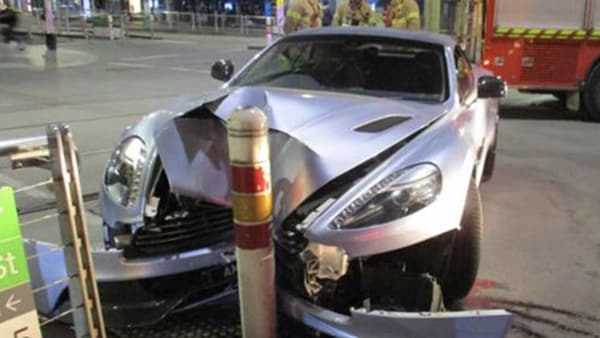 An unidentified woman drove a V12 Aston Martin Vanquish, worth almost half a million dollars (around ₹3.75 crore), into a tram stop railing in Melbourne, Australia. She reportedly fled the scene on foot, leaving the owner of the British GT car still stuck in the passenger seat.

The local police authority has launched a manhunt to locate the female driver after she left the spot in a bizarre fashion.

According to the Melbourne East Police, the incident happened at the Elizabeth Street late at night. The police believes she took a turn at Collins Street and crashed into a pole near a tram stop.

Before the police could arrive at the scene, she had fled the scene. The police found out that the owner of the Aston Martin, a 27-year-old male, was left behind by the woman in the passenger seat.

Later, the local police administration released photos of the damaged Aston Martin Vanquish. The images hint that the car was possibly driven at speed when the crash occurred.

Images of the crashed Aston Martin Vanquish show that the front side of the vehicle has been majorly damaged. By the looks of it, it seems the car had hit the pole head-on which caused the bonnet and front bumper extensive damage. The damaged vehicle had to be towed away from the scene.

The female driver remains elusive as the cops have launched an investigation. In fact the Victoria Police had to put out a message on social media seeking help to locate the woman.

We are hoping to speak to the driver of an Aston Martin following a car crash in Melbourne’s CBD early this morning. → https://t.co/rymIGiVmU8 pic.twitter.com/xpHL4HL2wM

The Aston Martin Vanquish was powered by a 5.9 litre V12 engine, which also may have been damaged due to the crash. The V12 could produce 565 horsepower and 457 pound-feet of torque.

The condition of the vehicle is still not know. But the owner will have a lot to spend to get it back on the road for sure.