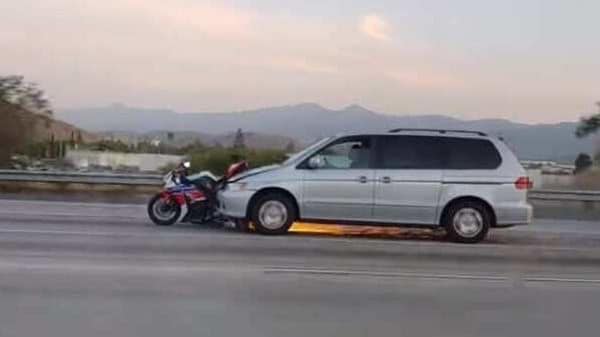 Photo courtesy: Screengrab of the incident video posted by Will Panda on YouTube.

In a peculiar - and horrific - hit-and-run incident, a driver of a minivan was filmed dragging a Honda superbike along the 91 Freeway highway in Corona, California. The motorcycle can be seen pinned below the minivan's front bumper while sparks came out of the speeding car.

According to the California Highway Patrol (CHP), the Honda bike was going at a speed of 65 mph (104 km/h) when the minivan hit it from behind at around 70 mph (112 km/h), as reported by CBS Los Angeles. After striking the motorcycle, the driver of the minivan failed to stop, thus dragging it all along the highway.

The minivan continued dragging the motorcycle attached to its bumper till it eventually crashed into a fence. The driver then fled on foot, leaving the motorcycle on the side of the road in a terrible state. Attempts were made to stop the accused by witnesses but he managed to escape the scene, as per CHP.

The question remains, where was the motorcycle rider all along? The man named Chain Arunritthirot had landed some 200 feet away after the van collided with his bike, reported CBS. Luckily, he did not get seriously injured during the incident but did complain of pain in his arms and legs.

The driver of the minivan, 25-year-old George Valentin, has been arrested by police on felony charges of hit and run after he admitted to being the driver of the speeding car, CBS reported.