The court also said that advertising the requirement for stickers and HSRP by the Delhi government in August this year was not the ideal time.Delhi government was suggested to keep its challan drive on hold as the same has created a fear psychosis among the people.
By :
| Updated on: 25 Dec 2020, 09:40 AM 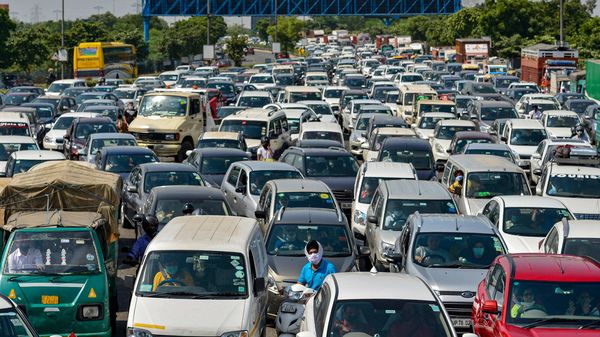 In Delhi, over 32 lakh vehicles registered before 2019 have to get the HSRP and third colour-coded sticker plates installed. (File photo)

The Delhi High Court Thursday suggested to the AAP government to give more time to people to obtain color-coded fuel stickers and high-security registration plates (HSRP) before it starts fining them ₹5,500 for the violations.

A bench of Justices Siddharth Mridul and Talwant Singh said the Delhi government should not create panic among the citizens which would make some people take advantage of the situation.

The court also said that advertising the requirement for stickers and HSRP by the Delhi government in August this year "was not the ideal time".

The judges said that even they were clueless about the requirement of the stickers and asked additional standing counsel Satyakam to come with "detailed instructions" regarding steps taken by the Delhi government to publicise the stickers and HSRP.

They asked the counsel to also come with instructions on who decided to outsource the sale of stickers and HSRP to OEMs, who fixed the rates for the same, and whether more time ought to be given to people to obtain the stickers and HSRP before starting to fine them for lack of the same.

The bench said that even the vehicles of the high court lacked these stickers and wondered whether they would be fined too.

Justice Singh, referring to his own personal experience with regard to the stickers, said he came to know about it from news reports of the challan drive and he booked the stickers for two of his vehicles with much difficulty as the website for the same kept crashing.

The court was hearing a PIL by the President of the Delhi Pradesh Congress Committee (DPCC), Anil Kumar, alleging that the Original Equipment Manufacturers (OEMs) were overcharging for the colour coded fuel stickers and HSRP that have been made mandatory for vehicles in the national capital.

During the hearing, the bench suggested to advocate Sunil Fernander, appearing for Kumar, to make Society of Indian Automobile Manufacturers (SIAM) a party as it was involved in the issuance of the stickers and HSRP.

Fernandes agreed with the court's suggestion and said he would do the needful before the next date of hearing.

He contended that till the next date the Delhi government should keep its challan drive on hold as the same has created a fear psychosis in the minds of the people who are scrambling to get the stickers and HSRP so that they would not have to face the fine.

Satyakam, during the hearing, told the bench that the Delhi government has nothing to do with fixing the rate of the stickers and HSRP and it was only concerned with implementing the Supreme Court directions that all vehicles should have HSRP and the stickers.

He said the Centre had fixed the rates and added that the concept of stickers was introduced only in 2018 by the apex court.

However, Fernandes showed the court a April 2012 public notice issued by Delhi government indicating rates of the HSRP sets and individual stickers.

He said the concept of stickers was already there and the only difference was the apex court direction in 2018 to make them colour coded according to the fuel used.

The petition, filed by the DPCC president through advocates Sunil Kumar and Nupur Kumar, has alleged that the manner in which the Delhi government was implementing Supreme Court orders for HSRP and colour coded fuel stickers would lead to a loss of around ₹342 crore to the people of the national capital.

According to the plea, the notified fee for a colour coded sticker is ₹12.15 and for a complete HSRP set, including the sticker, it is ₹213.24.

However, the OEMs were charging customers ₹141.60 (tax not included) and ₹991.20 for the sticker and the HSRP set, respectively, the petition has claimed.

It has further claimed that there was a "probable collusion" between OEMs and Delhi government as the latter has commenced a city-wide drive to challan vehicles not having the sticker or the HSRP and the fine amount of ₹5,500 has created a "fear psychosis" in people in the national capital region who are scrambling to get the sticker and HSRP.

"Any prudent person would prefer to purchase, in hot-haste, the entire HSRP set for ₹991.20, rather than pay a fine amount which is 5 times more i.e. Rs.5,500/-. This is the modus operandi of the private vendors/OEM in probable collusion with vested interests of the GNCTD," the petition said.

The plea has further alleged that it was easier to book the entire HSRP set, rather than just the sticker, on the websites of the OEMs and in this manner, people were being forced to pay ₹991.20 for the entire set when some may actually only require a sticker.

It has claimed that there are presently around 35 lakh vehicles in Delhi which require the sticker, and based on the price difference between ₹991.20 and ₹12.15, which comes to ₹979.05, the total profit for the OEMs would come to around ₹342 crore.

Another incidence of alleged fraud claimed in the plea was the facility of home delivery of the sticker for a fee of ₹118.

The petition has alleged that the apex court's HSRP order does not contain any provision of home delivery of the sticker or the registration plates and permitting the same would be a violation of the top court's decision.

The petition has sought a direction to the Delhi government to ensure only the notified fee of ₹12.15 is charged for the stickers and the excess amount collected from vehicle owners be refunded.

It has also sought that the challan drive by Delhi government be kept on hold till there is adequate infrastructure for the stickers and HSRPs.