Delhi Congress President approaches Delhi HC, says the prospective scam may be to the tune of ₹350 crore.Colour-coded stickers are put on vehicles to denote fuel type.
By :
| Updated on: 24 Dec 2020, 08:58 AM 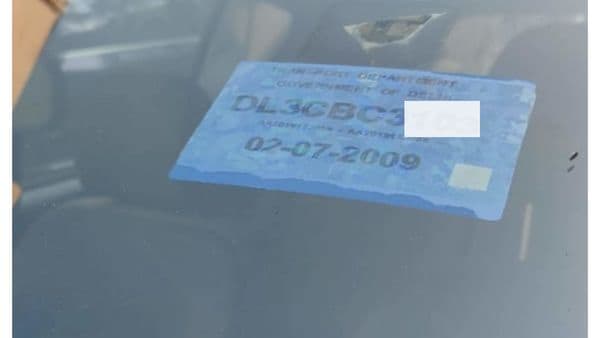 Colour coded sticker on the front windshield. The blue in this image denotes this is a petrol vehicle.

Delhi Congress President Anil Chaudhary has approached the Delhi High Court with a PIL seeking direction to the Aam Aadmi Party government to charge only the permissible fee of ₹12.15 from the vehicle owners in Delhi for the purpose of obtaining the 'colour-coded stickers'.

The petition was filed in Public Interest by Chaudhary Anil Kumar through advocates Sunil Fernandes, Sunil Kumar and Nupur Kumar.

(Also read: Full list of documents you need to book an HSRP for your vehicle)

The petition has challenged the notice issued in the month of November 2020 by the Delhi's Transport Department for affixation of colour coded sticker on old vehicles, registered in the Delhi.

The petitioner said that he wants to bring to the kind attention of the Court, a "prospective scam" of almost ₹350 crores and prays for grant of urgent orders to prevent the same.

"It is crucial to note that the price of the third registration plates/hologram sticker has been notified to ₹12.15 paise. The residents of Delhi are now been forced to purchase the colour coded sticker to be affixed on the Third Registration Plates/Hologram Sticker for an amount of ₹141.60 at the venue of the car dealerships. There is a straight increase of more than 10 times the notified price, by the OEMs. There are presently around 35 lakhs four-wheeled vehicles plying in the NCT of Delhi. If every one of these 35 lakh vehicle owners are forced to pay ₹129.45 more i.e., the difference between ₹141.60 and ₹12.15, then for the 35 lakh vehicle owners, the amount comes to ₹45,30,75,000 crores," read the petition, adding that this was clearly an example of unfair loss to the residents of Delhi and unfair gain to the private vendors/OEM at the "behest" of the government.

The petitioner apprised the court that public notice was purportedly issued in compliance with the directions passed by the Supreme Court in its orders dated 13.08.2018 and 30.09.2019 in petition titled as 'M.C Mehta vs. Union of India, wherein the apex court had directed the implementation of a colour coded sticker scheme on old and new vehicles, as a 'third sticker' of the High Security Registration Plate (HSRP) scheme. As per the HSRP Scheme, instead of the traditional number plates, High Security Registration Plate is to be affixed on all vehicles in the Delhi.

The HSRP Scheme consists of two number plates, one each at the front and at the back of the Motor Vehicle. Each of these two number plates has certain distinctive features which makes it secure from theft and counterfeiting.

In the HSRP scheme prior to 2018, there was only a single vendor, to affix HSR Plates in the Motor Vehicles (both old as well as new). This single-vendor was selected through a tender process.

In the post-2018 HSRP regime, instead of a single vendor, the vehicle manufacturers and their dealerships ("OEMs") themselves can now affix the HSRP at the various vehicle dealerships, at the point of sale of the said vehicles, the petition said.

The petitioner alleged that the OEMs instead of selling only the colour coded sticker with third registration plate, are now effectively forcing the residents of Delhi to purchase an entire set of brand new HSR Plates.The petition further highlighted that the OEMs are indulging in a further egregious fraud as there are so many technical difficulties in booking and obtaining the colour coded sticker on the website of the private vendors.

The provision for booking the entire set - HSR Plates including the Third Registration Plate works perfectly, thereby forcing the said person to purchase the entire HSRP set which is sold for ₹991.20, it said.

According to the petition, the Delhi Government through the Transport Department has commenced a city vide drive to 'Challan' those vehicles which do not have the colour coded sticker. The fine amount for default in colour-coded stickers is an extremely high amount of Rs.5,500.

"This has created a veritable fear psychosis in Delhi. Any prudent person would prefer to purchase, in hot-haste, the entire HSRP set for ₹991.20, rather than pay a fine amount which is 5 times more i.e. ₹5,500. This is the modus operandi of the Private Vendors/OEM in probable collusion with vested interests of the GNCTD," the plea read adding that they create technical hurdles and circumstances coupled with the huge fine amount, which unfairly induce/force/coerce the vehicle owners to opt for the entire HSRP set instead of the colour coded sticker, and this leads to humungous profit margins for the OEMs at the cost of the common man in Delhi.

"Based on the aforesaid vehicular population calculation of 35 lakhs, the price difference between ₹991.20 and ₹12.15, for 35 lakhs vehicles comes to a figure of ₹342,66,75,000 Crores. This is also a clear example of unfair loss to the residents of Delhi and unfair gain to the Private Vendors / OEM at the behest of the GNCTD," the court said.

"The third incidence of fraud/violation of the law that is being committed in the implementation of this Public Notice is the provision of the 'Home Delivery' of the colour coded sticker for a fee of ₹118. The HSRP order of 2018 does not contain any provision for Home Delivery of the Third Registration Plates or any of the HSR Plates. The very idea of migrating from a traditional number plate regime to HSRP regime was to ensure security features and prevent theft and counterfeiting," read the plea.

If the home delivery of the third registration plate is permitted, as per the minutes of the meeting held on October 27, 2020 in the Transport Department of the GNCTD, then it would be a direct violation of the HSRP Scheme, the petitioner said.

The petitioner has urged the Delhi High Court to direct Delhi Government to charge only the notified fee or legally valid and permissible fee of ₹12.15 from the vehicles owners in the Delhi for the purpose of obtaining the 'Colour Coded Sticker' on the 'third registration plate, to keep an account of all revenues/monies that the Private Vendors/OEMs have obtained from the vehicles owners of Delhi and refund the excess amount so collected.

It also sought directions to keep its 'drive' and imposition of fine amount of ₹5,500 on the vehicle owners in the Delhi on hold/abeyance, till such a time that there is adequate infrastructure for obtaining the colour coded stickers for 35 lakh vehicles and for providing adequate, fair and reasonable time, which should not be less than one year, from the date of the order that is to be passed by the court.

The petitioner has also sought to quash the Delhi Government's notification on home delivery of the colour coded scheme.