Chinese tycoon takes a major step in consolidating his sprawling auto empire.
By : Bloomberg
| Updated on: 12 Feb 2020, 10:15 AM 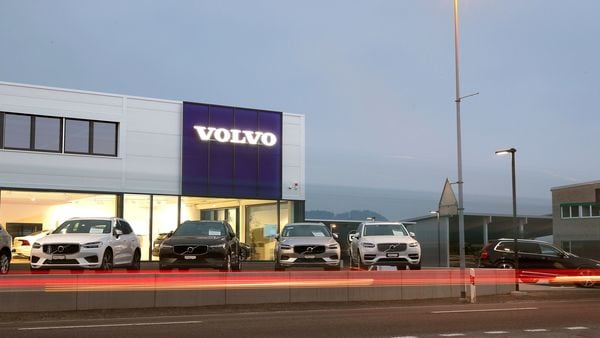 Volvo Car AB and Hong Kong-listed Geely Automobile Holdings Ltd. have said in a statement that they’re considering merging their businesses in a combined entity that would tap capital markets through Hong Kong and Stockholm. The parent company that they share, Zhejiang Geely Holding Group Co., is run by the ambitious Mr. Li, who seems to be taking a big first step toward consolidating his sprawling holdings.

Other moves, such as a spinoff, had already been signaled. In a bond prospectus dated November, Geely Automobile said that Volvo and the parent intended to merge operations into a standalone business to develop “next generation combustion engines and hybrid powertrains." Volvo Car said this would clear the way for it to focus on developing all-electric premium vehicles.Li has spent billions buying or building stakes in the likes of Mercedes Benz-maker Daimler AG, Volvo AB and Lotus Cars Ltd. through to flying-car maker Terrafugia Inc. He was recently reported to be in the running to make an investment in Aston Martin Lagonda Global Holdings Plc. Until now, he’s kept them separate but under his holding company.

Bringing the Swedish and Chinese car companies under the same umbrella makes sense at first glance. Volvo Car’s stable profits ($5.5 billion in 2019) could offset the tough terrain that Geely faces in China’s shrinking car market. The two already collaborate through a joint venture on the Lynk & Co. brand. Since the parent bought Volvo in 2010, Geely’s cars have received an upgrade after it set up the joint China-Euro Vehicle Technology AB research and development center. There’s also a case for cost sharing. Volvo is focused on the higher- and greener-end of the car spectrum. Geely hasn’t quite gotten there. That will help as China pushes forward with its electric car ambitions.

The pair said in their statement that the merger would “accelerate financial and technological synergies" and create a strong global group. So, let’s talk about the finances. To build up his empire, Li has piled on leverage at the Zhejiang Geely holding company level. Net debt stood at $8.1 billion at the end of September, more than double from a year prior. It needs to service that debt while feeding and funding its ambitions. S&P Global Ratings expects the company’s leverage to increase this year as volumes and margins contract.

Geely has held up relative to its auto-making peers, but earnings have been shrinking as sales in the world’s largest car market deteriorate. Its ability to spend and stay ahead of the technology curve are also constrained. It shelled out $423 million on capital expenditures in the 12 months to June last year, compared to Volvo’s $1.25 billion in 2019. It’s clear who will be driving once they come together.

The parent company will keep its firm grip. Through connected transactions, it holds the licenses that Geely uses to manufacture the cars in China. Because of this structure, Geely can make and sell cars there while holding 99% stakes in operating subsidiaries, despite its offshore incorporation, according to Moody’s Investors Service Inc.

Li needs this merger to work. With the coronavirus potentially wreaking operational havoc, the parent company has to be in financial order. A blockbuster valuation will help fund his future ambitions in a tougher global auto industry and pay down the debt he’s built up. What better way than to create an improved asset in the new entity, give it a boost with your crown jewel, Volvo, and monetize it. A more valuable asset makes for better collateral. Li will look to maximize the efficiency of his capital.

Geely, with an enterprise value of around $16 billion, trades at 7.2 times earnings before interest, tax, depreciation and amortization. It’s sitting on cash of around $2 billion and very little debt. Volvo generated $3.2 billion of Ebitda in 2019. Assuming a multiple of 2.5 times earnings, around that of other European carmakers, would value the Swedish company at around $8 billion. The valuation of the combined entity will be higher. Even two years ago, Volvo was looking for a valuation of double that on the lower end to as much as $30 billion when talk of going public alone surfaced.

Wherever the valuation comes out and whatever shareholders are willing to digest, let’s hope there are indeed synergies and Geely isn’t drawing too much out of Volvo Cars. That may defeat the purpose of Li’s entire exercise.