After weeks of restrictions, governments and corporations are sketching out exit strategies.Restarting Europe’s sprawling industrial network will prove complex.
By : Bloomberg
| Updated on: 14 Apr 2020, 04:42 PM 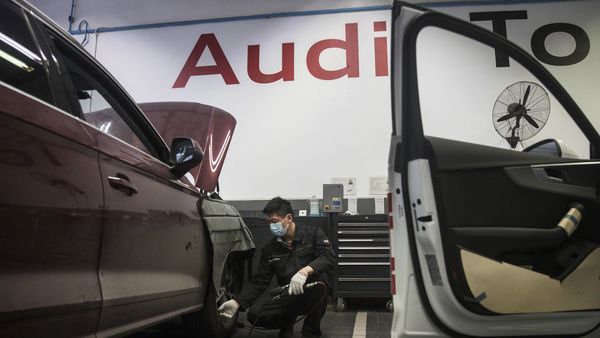 Volkswagen AG’s Audi unit, the group’s largest profit contributor, is among automakers gradually reopening factories in Europe, even as coronavirus lockdowns drag on across much of the region.

Some 100 workers at Audi’s Gyoer, Hungary site, one of the world’s largest engine plants, restarted output on an assembly line in a single-shift system, the company said Tuesday. A second line is set to follow at the end of this week.

Manufacturers are facing a crushing economic blow after governments across Europe placed unprecedented restrictions on public life to combat the spread of the virus, which has claimed some 120,000 lives worldwide. Car registrations in Europe may fall 20% in 2020, with 3 million lost vehicle sales, or 60 billion euros ($66 billion) in lower revenue, according to Bloomberg Intelligence analyst Michael Dean.

After weeks of restrictions, governments and corporations are sketching out exit strategies. Still, any efforts to get the economy back on track are likely to be gradual, and may encounter setbacks if the virus resurges.

What’s more, restarting Europe’s sprawling industrial network will prove complex. Supply chains are closely intertwined across regions, transport restrictions are poised to remain in place for some time and the number of infections is still relatively high in some areas.

Industry executives have warned against a hastily arranged restart and called for a coordinated European approach, even as crisis-fighting measures vary from country to country.

Audi’s vehicle production in Hungary could start toward the end of next week and will be coordinated within Volkswagen. The world’s biggest automaker employs about 470,000 people across Europe, the majority of its global workforce of around 670,000.

“The company is doing everything to safeguard the health of employees," Audi said in the statement.

VW has kept some components operations running in Germany during the shutdown, with a total 1,700 employees across five sites, to safeguard parts supplies to factories in China where the industrial recovery is progressing.

In Germany, Chancellor Angela Merkel will discuss possible steps to ease restrictions with leaders of the German states on Wednesday. While the increase in new infections has moderated, neighboring France just extended a lockdown that might push the bloc’s second-largest economy into a deeper recession.