Macron’s announcement will kick off a decisive week for Renault SA, which is set to announce sweeping cost cuts on Friday.
By : Bloomberg
| Updated on: 27 May 2020, 10:54 AM 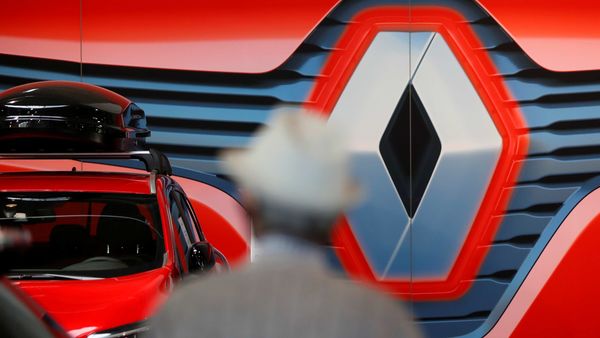 A customer looks at cars in front of a logo of Renault carmaker at a dealership in Nantes, France, May 26, 2020.

President Emmanuel Macron unveiled a raft of subsidies for the French auto industry that will add another 8 billion euros ($9 billion) to the government’s stimulus bill this year.

The plan will include a subsidy of 7,000 euros for the purchase of electric cars and aims to increase production to 1 million electric or hybrid vehicles a year by 2025, Macron said during a visit to a Valeo SA plant in northern France that makes equipment for hybrid drivetrains.

The presidential announcements highlight the crucial role the auto sector plays in the French economy and how hard it has been hit by the coronavirus pandemic.

The auto plan is one of a trio of industrial stimulus packages pledged by Finance Minister Bruno Le Maire in recent weeks. The state already earmarked 18 billion euros for the tourism industry and is preparing to help the aviation sector as well. The car industry employs 400,000 people in France, with roughly 30 vehicle and parts factories dotted across the country.

Macron’s announcement will kick off a decisive week for Renault SA, which is set to announce sweeping cost cuts Friday. Along with Peugeot-maker PSA Group, the carmakers are among France’s largest manufacturers and were behind historic models like the Citroen 2CV and Renault 4. France owns stakes in both companies.

Renault plans to shut one engine and transmission factory and is mulling the future of four other production sites in France as part of a cost-cutting plan to be unveiled Friday, Franck Daout, a spokesman for the CFDT union, said Tuesday. Renault Chairman Jean-Dominique Senard has discussed the proposal with Finance Minister Bruno Le Maire, he added.

France’s auto aid package will add to pressure on public coffers. The government has already rewritten its budget forecasts twice this year, and sees debt rising to more than 115% of annual output as it spends to avert job losses and bankruptcies.

While Macron has seen his approval rating slide, his government is rated better prepared to handle the economic slump than the health crisis.