Ford's new Rear Occupant Alert technology first sends a visual alert on the vehicle’s centre display for ten seconds, reminding drivers to check rear seats.New technology also helps drivers remember to collect other belongings such as a laptop or handbag that may be at risk of theft if left behind.
By : HT Auto Desk
| Updated on: 24 Jun 2021, 06:30 PM 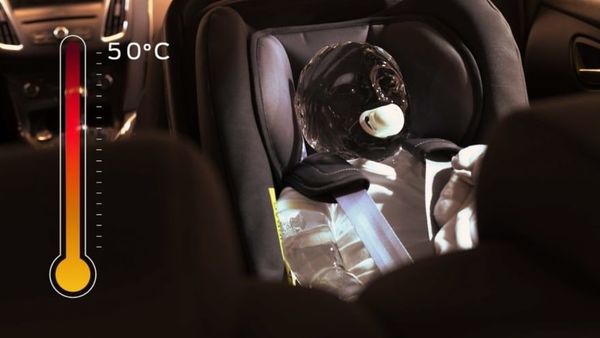 Ford says children and pets left in hot cars are the source of dozens of tragic deaths worldwide each year.

Ford has developed a new technology designed to help prevent kids and pets from being left out in the rear seats of hot cars. The technology, called Rear Occupant Alert, currently rolled out in Europe, sends a reminder to drivers to check the back seats if they had opened rear passenger doors at the start of a journey.

The technology is activated inside the vehicle after it has stopped and the ignition turned off. A visual alert is shown on the vehicle’s centre display for ten seconds or until canceled. This is followed by an audible warning, reminding the driver to check the rear seats before exiting the vehicle. The system also helps drivers remember to collect other belongings such as a laptop or handbag that may be at risk of theft if left behind.

In order to highlight the dangers of hot cars and kids being left inside, Ford commissioned an ice sculptor to create an "Ice Baby" and an "Ice Dog". It then placed them inside a car at its "Weather Factory" facility in Cologne, Germany. Outside the car, the temperature was set to 35° C. But within 19 minutes, temperatures inside the car had risen to 50° C and the ice sculptures started melting immediately.

Ford says that this test demonstrated how the greenhouse effect can affect vehicles as short wave radiation enters through the windows, bounces off the seats and dashboard, and heats up the vehicle. Thus, causing damage to babies or pets left inside. "Rear Occupant Alert will help drivers to remember what they might think they could never forget – that they might have left a child or a pet on the rear passenger seats," says Joerg Beyer, executive director, Engineering, Ford of Europe.

As per an advocacy group, 'KidsandCars', leaving children in cars and children being trapped after gaining access to vehicles on their own can both be major risks of death through hyperthermia (heat stroke). It also adds that a child's body overheats three to five times faster than an adult's.