Home Auto News Ford To Deliver Vehicles Without Certain Chips Amid Shortage, To Fit Them Later

Ford to deliver vehicles without certain chips amid shortage, to fit them later

Customers who purchase a Ford Explorer without the controls will receive a price reduction. When the necessary parts are available, Ford will install the controls at no cost.
By : HT Auto Desk
| Updated on: 15 Mar 2022, 08:10 AM 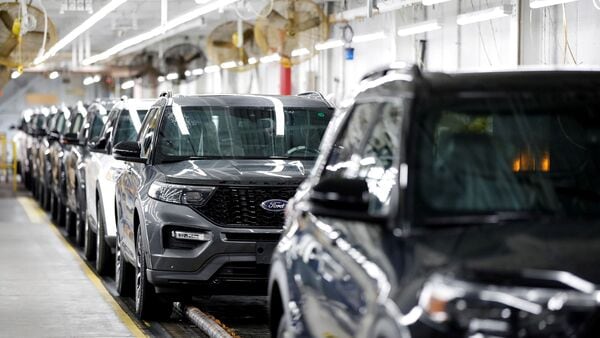 Ford will sell and deliver vehicles without certain semiconductors or related components amid the crisis of components, and these parts will be fitted into the vehicles at a later date by the official dealerships, Auto News reported. The automaker will send vehicles without chips controlling non-safety critical features to dealers.

The company will then send the necessary chips to dealers within one year to install in the vehicles. The automaker's executives reportedly told dealers about the plan during a meeting in Las Vegas, the report stated. However, it is currently unclear when shipments of these vehicles will commence or which specific Ford models will be impacted by this decision.

The report mentions that while other models are unknown, the Ford Explorer will be one of the models that will be delivered to dealerships without certain chips. It will be sold without rear climate controls but that the function can be added later. Customers who purchase an Explorer without the controls will receive a price reduction.

When the necessary parts are available, Ford will install the controls at no cost. “We are offering ways for our customers to get their vehicles sooner during the global semiconductor shortage," Ford spokesman Said Deep told the dealers in the meeting.

This is not the first time that Ford is offering such a proposition to its customers. The company has previously offered its customers the option to order F-150 models without the auto start-stop feature. Ford Bronco has also been one among the models impacted by parts shortages. This can be proven by the fact that hundreds of Bronco models were recently seen piling up around the automaker’s Michigan manufacturing site. These Bronco models are awaiting semiconductors and Ford plans to begin shipping them within three months.