Ford Motor Co has faced issues with quality control in recent times with the problem with door latch occurring for the third time now.By Ford's own admission, brake troubles have caused seven low-speed crashes and has injured two
By : HT Auto Desk
| Updated on: 11 Jun 2020, 08:23 AM 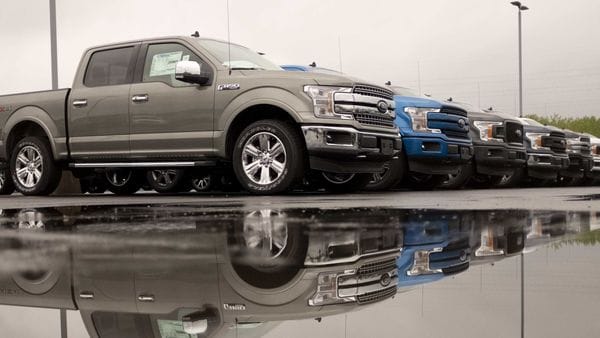 File photo of F-150 trucks on display at a car dealership in Peoria, Illinois, US.

US auto giant Ford recently recalled around 2.5 million cars in the country, in Canada and elsewhere in the world to repair possible faults in the door latch and fix brake fluid leaks.

Associated Press reported on Thursday that the problem with the door latch is expected to cover nearly 2.1 million cars, including SUVs and vans. Another 344,000 F-150 pickups in the US are being recalled due to brake fluid leak.

While the problem with the brake fluid leak has already resulted in as many as seven low-speed crashes and resulted in two injuries, the recall for the door latch problem is the third time Ford has had to address the issue.

Recent times have seen Ford and several other manufacturers struggle with quality-control issues. Japansese car maker Nissan had recently issued a recall for 1.9 million cars for a hood latch problem. Mitsubishi had recalled around 223,000 cars in Canada and cold-weather US states to fix a problem related to rust in the suspensions. Earlier in June, Honda had issued a recall for over a million cars across the globe in a bid to fix an issue which had the potential of having a detrimental impact on engine performance.