The Tecnomar for Lamborghini 63 superyacht draws power from its two MAN V12-2000HP engines that produce 4,000 hp of power.The Y-shaped bow lights of the yacht are a homage to the Lamborghini concept car Terzo Millennio and to the Sián FKP 37.
By : HT Auto Desk
| Updated on: 28 Jul 2021, 10:55 AM 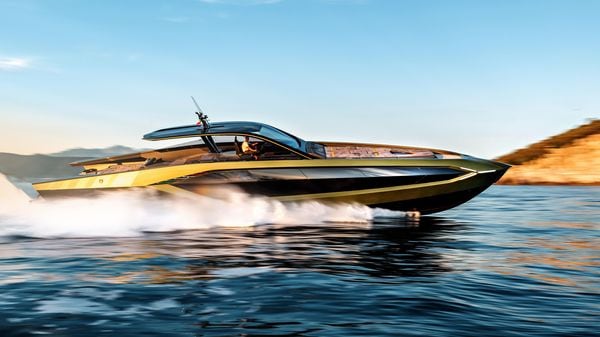 The Tecnomar for Lamborghini 63 motoryacht features all the design elements visible on the supercars of the Italian automaker.

The first Lamborghini motoryacht - 'Tecnomar for Lamborghini 63' - co-developed with The Italian Sea Group has been delivered to its owner. The latest-generation superyacht is inspired by the design, colors and details of Lamborghini's first Hybrid super sports car - Sián FKP 37, and pays homage to all the iconic supercars from the Italian manufacturer.

The motoryacht conquers the sea by drawing power from its two MAN V12-2000HP engines that produce 4,000 hp of power, also making it the fastest yacht in the Tecnomar fleet of The Italian Sea Group. The Lamborghini 63 motoryacht features all the design elements visible in supercars of the Italian automaker as well as the use of carbon fiber, making it an ultralight yacht with weight under 24 tons.

(Also read | This 4,000 hp Lamborghini runs on water, oozes out opulence from every inch)

On the exterior, the motoryacht is made of a super sportive silhouette, with a cutting-edge but thoroughly nautical appearance. Its hull and the superstructure are created from a high-performance shell that was developed by naval engineers specializing in hydrodynamic sciences. Design cues from Lamborghini Miura and Lamborghini Countach of the 1960s and 1970s were considered for the exterior and given a more contemporary re-touch. 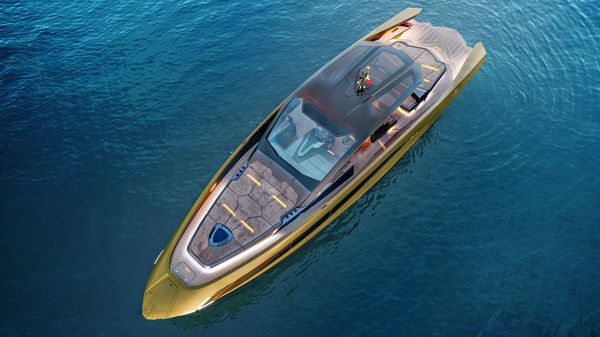 The Lamborghini motoryacht is made of a super sportive silhouette, with a cutting-edge but thoroughly nautical appearance.

The bow lights of the yacht are a homage to the Lamborghini concept car Terzo Millennio and to the Sián FKP 37, both of which feature distinctive Y-shaped front lights. On the inside, the yacht's used in Lamborghini supercars. The fully customizable colours and materials have been used in the manner of Lamborghini’s Ad Personam programme.

(Also read | Lamborghini to bring two new models in 2022, will be based on Huracan and Urus)

The superyacht's instrument panel is akin to the cockpit of a super car but in a nautical style, with integrated navigation and control systems. Just like Lamborghini sports cars, all details are finished in carbon fibre, including Carbon Skin used in the sports seats and on the helm.

As the first Lamborghini yacht goes out on the sea to prove its capabilities, the company's Strategy Director Stefano Rutigliano, says, "We are proud to see the essence of Lamborghini DNA that today sets out to sail the sea with the same attitude of our super sports cars that race across the asphalt."