One of the six wrecked Ford Bronco Sports models listed on the auction website includes a Black unit that was involved in a rollover and caught fire.
By : HT Auto Desk
| Updated on: 22 Mar 2021, 04:01 PM 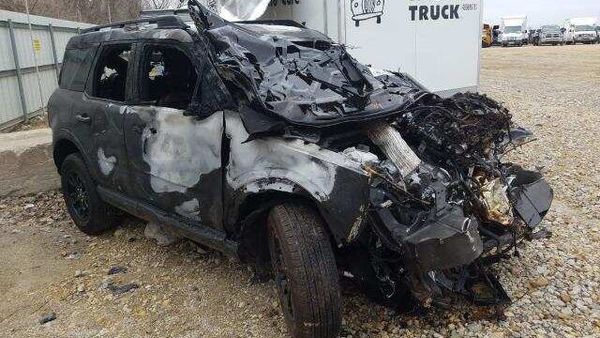 Not long after the customer delivers began for the 2021 Ford Bronco Sports models, a lot of few crashed units have been put on sale in the US through Copart.

There are around six such Broncos that could be made available for sale eventually, as per the listing on the auction website. These wrecked Broncos could be bought for cheap enough for those who want to use the genuine parts of the vehicles. However, the damage sustained on these models vary from case to case.

The first of the six examples that is currently up for sale in Chicago is a Blue Bronco Sport with mostly rear-end damages. The interior of the vehicle seems to be mostly damage free and intact. The 1.5-liter turbocharged three-cylinder vehicle has been driven for only 951 miles.

(Also read | Ford F-150 pickup trucks to be built without computers. Blame it to chip crisis)

The vehicle with the worst damage is an upcoming Black Bronco Sport that was involved in a rollover and caught fire. Most of the vehicle is burnt and a very few parts seem to be recoverable.

Two other crashed Broncos that are heading for the auction on Copart include one painted black with just 1412 miles on the clock and the other painted grey with only 853 miles driven. Both the vehicles were involved in a front-end collision.

Talking of the remaining two of the total six models, there is a second Outer Banks model listed from Chicago and a black Outer Banks model from Pittsburgh which has only been driven for 258 miles. The latter has sustained damages that are limited to the front-end including its three-cylinder engine.

The Ford Bronco Sport model has been built on the mechanical underpinnings of the company's Escape crossover utility vehicle. It comes with standard four-wheel-drive and off-road capabilities to take on the rugged turf.