BMW iX EV, priced at ₹1.16 crore (ex showroom), has been brought to the country via the completely-built-up (CBU) route.Deliveries of the all-electric vehicle will begin from April next year.
By : HT Auto Desk
| Updated on: 14 Dec 2021, 12:27 PM 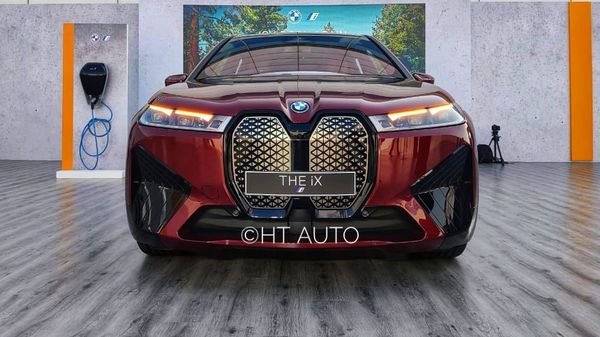 BMW India on Tuesday informed that the first lot of its fully electric all-wheel drive iX model has been completely sold out on the first day of the launch. The iX EV was officially launched in the country on Monday at a price tag of ₹1.16 crore (ex showroom) via the completely-built-up (CBU) route.

The first phase of bookings was opened for customers online and across BMW India dealerships, witnessing an overwhelming response. Deliveries of the all-electric vehicle will begin from April next year. The German automaker will initiate the second phase of bookings in the first quarter of 2022.

The flagship EV from BMW will compete in the luxury EV space in the country with rivals such as Mercedes-Benz EQC, Audi e-Tron and Jaguar I-Pace. It is a massive show of intent from the company that it is looking to push its way towards clean mobility. "We were confident that the first-ever BMW iX will be a sought-after product. With all units sold on the first day, we are now preparing to fulfill the demands of other customers who are waiting to own this exclusive electric BMW SAV," said BMW Group India President, Vikram Pawah.

BMW iX SUV comes as the first of the three pure electric vehicles that the company has planned for the Indian market. The model is powered by dual high-voltage electric motors that come fitted to each axle. The all-electric iX is claimed to come with a max range of 425 km on a single charge. The electric SUV is capable of accelerating from 0-100 kmph in 6.1 seconds.

A key product in BMW's sustainable product line, the iX SUV is claimed to not have used fossil fuel during its manufacturing process. BMW says that no rare earth metals were mined as well, and the car has a relatively high level of recycled materials such as plastics and leather.

BMW iX SUV comes with features such as a seamlessly integrated 14.9-inch infotainment screen and a 12.3-inch driver display. The steering wheel gets soft-touch buttons and scroller wheels and there is a centre console with a touchpad. For music lovers, there is an 18-speaker Harman Kardon surround audio system with the rear speakers integrated into the back seats. The SUV also offers multiple USB charging points and wireless support for Apple CarPlay and Android Auto.