Ferrari 488 is one of the most sought-after sportscars around but not if its face is almost entirely disfigured moments after delivery.
By : HT Auto Desk
| Updated on: 04 Apr 2022, 01:03 PM 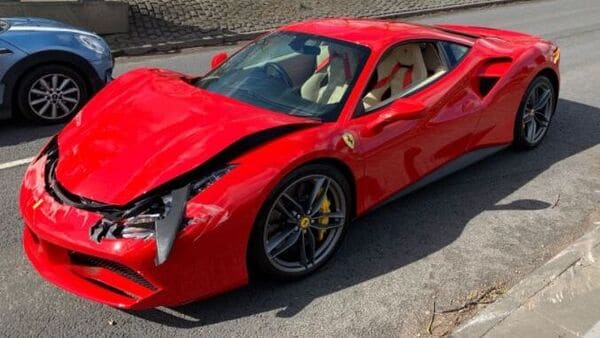 This image of a damaged Ferrari 488 was tweeted by @DerbyshireRPU

It was a gleaming red-coloured speed monster one minute. The next, it was a sorry damaged supercar with a punched-in face. The journey of one particular Ferrari 488 went from elation to absolute dismay in a span of just three kilometres after its owner took its delivery only to meet with an accident.

The incident was reported by Derbyshire Road Policing Unit on their Twitter handle on April 1. But as much as one would have prayed for this to be an April Fool's joke, it was more of an April Fool's nightmare. The entire front bonnet of the sports car was damaged with the bonnet bent in a V-shaped angle. There is also damage expected to the crucial components under it.

It is not clear how the accident happened even though the matter is under investigation. Initial suspicion is that the driver may have been unable to manage the sudden thrust on throttle inputs and hit the Ferrari head-on into an obstruction. What is confirmed though is that no one was injured in the incident although the accident may have involved a larger or taller vehicle, considering the damage to the nose of the vehicle.

Derby. 1st April. Driver bought a Ferrari this morning and crashed it after driving it less than 2 miles. No injuries. #DriveToArrive pic.twitter.com/X4IMuflPa5