The second free practice session was topped by Hamilton for Mercedes, while Max Verstappen stood on fourth.Previously, Red Bull's Max Verstappen topped the FP1 and enjoyed an early edge over Hamilton.
By : HT Auto Desk
| Updated on: 11 Dec 2021, 11:23 AM 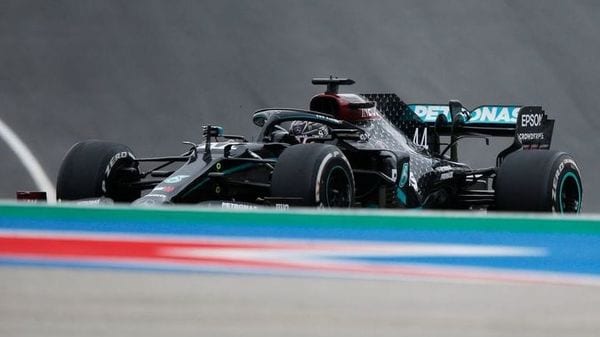 Lewis Hamilton in action during a practice session from 2020.

Lewis Hamilton has topped the free practice 2 at the title-deciding Abu Dhabi Grand Prix at the Yas Marina Circuit on Friday, while previously, Red Bull's Max Verstappen topped the FP1 and enjoyed an early edge over Hamilton in what could be called as one of the most thrilling race weekends of the recent times.

During the FP1, Verstappen clocked a 1m25.009s while racing on soft tyres, two tenths clear of Valtteri Bottas, with Hamilton - whom he is level on Driver World Championship points - 0.346s off the pace in third, marginally ahead of Sergio Perez.

On the other hand, the second practice session was topped by Hamilton for Mercedes, while the Dutchman stood on fourth.

The Briton set the free practice 2 benchmark of 1m23.691s which was also the fastest time of the day. Hamilton managed to set this time while racing on soft tyres, with 25 minutes remaining, then switched to mediums for his race simulation.

That put Alpine's Esteban Ocon, who had shot up with a lap of 1m24.034s just before seven-time world champion, in second place by 0.343s - and Hamilton's teammate Valtteri Bottas third overall by a gap of 0.392s having previously drifted into the Turn 12 barriers on his medium-tyred laps. As an aftereffect of the slid, Bottas switched to soft tyres within just 15 minutes of the session.

Kimi Raikkonen, who drives for Alpha Romeo, tainted his final F1 Friday practice of the year by spinning and crashing at Turn 14 in FP2. Following his accident, the session was red-flagged, just after the chequered flag had flown.