Lewis Hamilton and Max Verstappen are engrossed in a title race that has been the tightest in more than a decade. History beckons Hamilton in Abu Dhabi to become the greatest driver in F1 history if he manages to win. Verstappen is still waiting for his first championship title.
By : HT Auto Desk
| Updated on: 06 Dec 2021, 03:21 PM 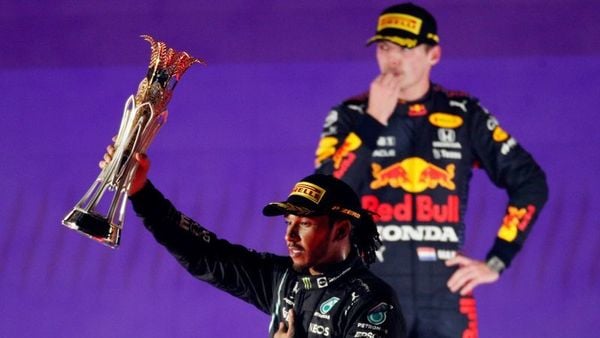 Mercedes' Lewis Hamilton celebrates with the trophy on the podium after winning the Saudi Arabian Grand Prix, as second placed Red Bull's Max Verstappen looks on.

Lewis Hamilton, who is already the most successful driver in the Formula 1 history, is entangled in a rarely seen title race to be the F1 champion this year. Max Verstappen, Hamilton’s biggest rival in the circuit, is tied with him at 369.5 points each at the end of the penultimate race on Sunday at the Saudi Arabian Grand Prix.

While Verstappen maintains the lead technically with as many as nine wins this season, Hamilton is just a win away from catching up. All eyes are now in Abu Dhabi for the final race of the season next weekend where F1 fans are betting to see their favourites break the tie and lift the trophy.

The Lewis Hamilton-Max Verstappen rivalry has become one of F1's best on-track duel in more than a decade. Though it has not been without its share of controversies, the latest took place at the Saudi Arabian Grand Prix, it has rekindled some of the oldest rivalries in the history of the world's biggest motorsports series after years of predictable results.

(Also read: Is Jeddah home to the most dangerous F1 track of this season?)

A standout moment in the 2021 championship 👀#SaudiArabianGP 🇸🇦 #F1 pic.twitter.com/6oFiWo0JU8

24-year-old Max Verstappen, who drives for Red Bull Racing Honda team, has won 19 grand prix but never been crowned as the champion. His best seasons have been the 2019 and 2020 championships when he finished third. He would aim to erase his dubious record of winning most races without the world champion title at Abu Dhabi.

On the other hand, Lewis Hamilton, the 36-year-old Mercedes-AMG Petronas F1 Team driver, is chasing a record eighth championship title that will take him past the legendary Michael Schumacher. He is just a win away to be crowned as F1's greatest driver ever.

Coming back to the title race this season, the Hamilton-Verstappen tie will remind F1 fans of some of the greatest past rivalries. The most significant of them was the title race 37 years ago when Austrian Niki Lauda secured his third world title by defeating McLaren teammate Alain Prost by just half a point in 1984. It was Lauda's return season to the circuit after a two-year sabbatical and was also his penultimate season before retirement.

The last time a title race went down to the wire was back in 2008. Incidentally, that title race 13 years ago also involved Lewis Hamilton, then famous of being the second youngest driver to win the championship at the age of 23 years. Only in his second F1 season back in 2008, Hamilton had beaten Brazilian Felipe Massa. It was so close that despite Hamilton finishing fifth in the race and Massa winning the Grand Prix, the British driver won by one extra point despite one less win than the Brazilian in the entire season.