The Tesla plant in California's Fremont had already been opened by Elon Musk in an act of defiance against local health department's orders.Donald Trump had tweeted in favour of Musk saying the Tesla plant should be allowed to resume work.
By : HT Auto Desk
| Updated on: 13 May 2020, 12:05 PM 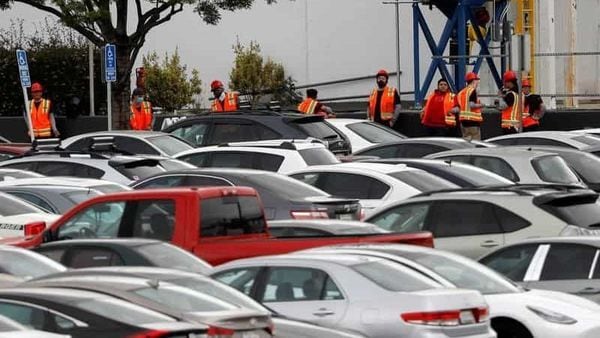 Workers in orange vests are seen outside Tesla's primary vehicle factory after CEO Elon Musk announced he was defying local officials' restrictions against the coronavirus disease (COVID-19) by reopening the plant in Fremont, California, U.S. May 12, 2020. REUTERS/Stephen Lam

Hours after US President Donald Trump tweeted in support of Elon Musk's demand for Tesla plant in Fremont (California) to be allowed to resume operations, the Alameda county officials budged from their position and gave the go ahead. But with conditions.

While the Tesla plant here had already resumed operations in open defiance to orders from local health officials - Musk had even courted arrest, Alameda county officials late on Tuesday night (US time) tweeted that the facility can open provided it adopts extra recommendations to battle the coronavirus in its safety plans.

Bloomberg quoted health department officials as saying that they have held extensive talks with Tesla executives and reviewed its safety and prevention plans, and will allow additional approved activities for local businesses including Tesla on May 18, provided data shows progress with containing the virus.

The factory is located in one of seven San Francisco Bay area municipalities which had recently extended restrictions on businesses. This had prompted an already livid Musk to take the battle of words to electric levels. He had termed the lockdown as 'fascist' after previously terming the 'panic' around Covid-19 as 'dumb.' He also threatened to take the facility out of California and Texas Governor Greg Abbott said he was in talks with him.

Eventually, it may have taken a single tweet from Trump to make Alameda county officials budge from their position. Critics of Musk have, however, cited that health and safety of employees and of people at large cannot be subservient to business operations. The decision to now allow Tesla and other businesses to resume work may invite their ire.