The facility will become Tesla’s fourth gigafactory in the world.The company had bought its first factory in California from Toyota.The other two Tesla facilities are in China and Germany, which is under construction.
By :
| Updated on: 23 Jul 2020, 08:01 AM 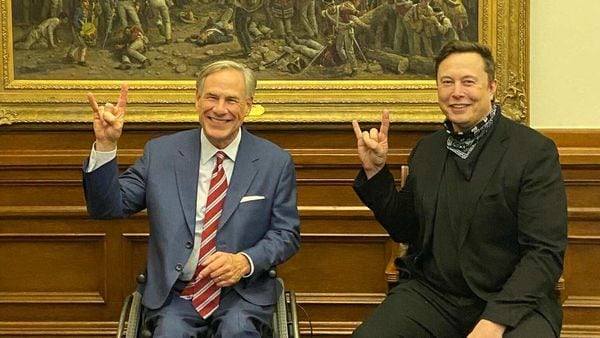 Tesla CEO Elon Musk with Greg Abott, Governor of Texas, after the state was finalised for the electric carmaker's second US gigafactory site. (Photo courtesy: Twitter/@GregAbbott_TX)

Tesla Inc. chose a Texas site for the electric-car maker’s second US auto factory and production base for Cybertruck, the model Elon Musk will aim at Detroit’s loyal pickup buyers.

The company will build the plant near the city of Austin, Musk said during Tesla’s second-quarter earnings webcast Wednesday. The carmaker has for months been scouting locations for a facility that will produce the Cybertruck, Semi and Roadster, all of which are still in development, and the Model Y crossover for customers on the East Coast.

Tesla said in early June that the company had narrowed its focus on locations in the Lone Star State and in Tulsa, Oklahoma. The carmaker told local officials in the Austin area that it wanted to start construction in the third quarter of this year on a 4 million to 5 million-square-foot plant that will employ 5,000 workers.

“Texas has the best workforce in the nation and we’ve built an economic environment that allows companies like Tesla to innovate and succeed," Governor Greg Abbott said in an emailed statement. Tesla will invest more than $1 billion, he said.

The facility will become Tesla’s fourth for vehicle assembly. The company bought its first factory in Fremont, California, from Toyota Motor Corp. in the wake of the global financial crisis for just $42 million. It started making Model 3 sedans on the outskirts of Shanghai early this year and is planning to begin output of vehicles near Berlin next year.

(Also read: Elon Musk hints next Tesla gigafactory will be in ‘Asia, outside China’)

Tesla unveiled a Cybertruck prototype in November, with Musk pitching it as a radically different take on a type of vehicle Ford Motor Co., General Motors Co. and Fiat Chrysler Automobiles NV count on for much of their profits. The demonstration of what were supposed to be shatterproof glass windows didn’t go as planned but still managed to generate enormous publicity.

Musk’s declaration that Tesla would build the plant led cities and states across the country to make competing offers to support the project. The move was reminiscent of the company’s 2014 announcement that it planned to build a massive battery factory. The carmaker chose Nevada after the state offered $1.3 billion of incentives.

(Also read: How Tesla defined a new era for the global auto industry)

The search for the Cybertruck plant began before Musk threatened to move Tesla’s headquarters and future programs to Texas or Nevada after a California county blocked the carmaker from reopening its Fremont factory in the midst of the coronavirus pandemic. Days after his outburst, the company defied county health officials and restarted production.

On Wednesday, Musk said Tesla will continue to grow in California.