Electric scooter companies pull out of cities worldwide amid coronavirus

After months of industry turbulence, the likes of Lime and Bird are rethinking their business strategies as travel demand plummets.
By : Bloomberg
| Updated on: 28 Mar 2020, 08:14 AM 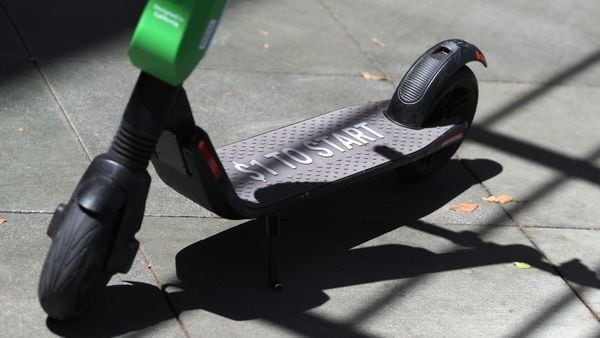 A Lime shared electric scooter is parked on a street in Santa Monica, California.

Dockless scooter companies charged into cities in 2018, promising a mobility revolution with cheap, clean rides and billions in venture capital backing. Yet they soon faced roadblocks, including shaky business models, safety concerns, and fast-moving city regulators. At the start of 2020, cash-losing operators were shrinking their headcounts and vehicle fleets.

Now as governments around the world fight to slow the coronavirus pandemic, micromobility companies are facing a deeper existential challenge. The two largest global operators, Lime and Bird, drastically reduced fleets by mid March. Several other startups, including Wheels and Jump, say they’re looking at how to continue operating as cities issue lockdown orders and demand plummets. The appeal of sharing a high-touch vehicle with an unknown number of strangers has succumbed to the fear of viral transmission.

Lime’s CEO and co-founder Brad Bao wrote in a blog post on March 21 that the startup is “winding down or pausing" service in all markets but South Korea. Prior to the pandemic, the company operated nearly 120,000 scooters in 30 countries across the Americas and Europe. Bird announced it is removing its fleets in six U.S. cities: Miami and Coral Gables, Fla.; Portland, Ore.; and Sacramento, San Francisco, and San Jose.  It had already pulled vehicles from 21 European cities.

Jump, a subsidiary of Uber Technologies Inc., has paused electric bike and scooter rentals in most of its European markets and trimmed the size of its fleets across the U.S. It stopped service entirely in Sacramento at the city’s request. Lyft Inc. has continued to operate its network of mostly docked bikeshare systems in eight U.S. markets. So far, it’s kept dockless scooters available for rent in all urban markets but Miami. Every company with vehicles in circulation said that they have heightened their handlebar sanitation protocols and are encouraging riders to do the same.

The sudden disappearance of scooters and e-bikes comes after months of industry turbulence. Lime and Bird have struggled to raise money from investors, and both cut staff starting late last year. The companies, once singularly focused on growth, have realized their problematic business plans need rethinking.

Last year, talks of an acquisition of either company by Uber didn’t pan out. Some industry watchers said the eye-popping valuations of each—in 2019 Lime and Bird hit $2.4 billion and $2.5 billion, respectively—were a factor. The Information reported on Thursday that layoffs are now imminent at Lime, as it seeks emergency funding at a valuation of just $400 million. (A Lime communications officer denied that layoffs are coming.) Uber and Lyft, both of which went public in 2019, conducted layoffs in their own micromobility divisions late last year, and both recently pulled dockless vehicles from several markets.

Wheels and Lime say ridership was rising before the start of widespread social distancing. The decisions to reduce urban fleets now have been motivated largely by a sense of responsibility for the health of their riders and workers who maintain the vehicles, Lime and Bird say. The economics of the business is also an undeniable factor, said David Spielfogel, Lime’s chief policy officer. “If everyone is sheltering in place and not moving around, the business is no longer sustainable," he said. Tourists, which generate significant scooter ridership in many cities, have also vanished from most markets. While there may be ways for Lime to generate revenue during the crisis, that’s not a priority while people are at home, and “governments are trying to get the virus under control," Spielfogel said.

Many investors, already skeptical about the viability of the e-scooter business, say the current situation could be the nail in the coffin for an industry beset by financial, safety, and regulatory woes. “I’ve heard a number of people compare the plight of the scooter companies to Uber and Lyft. Like them, scooters are seeing plummeting usage," says Aaron Michel, a partner at the early-stage venture capital firm 1984 Ventures, which has no investments in the micromobility space. “Unlike Uber and Lyft, though, the verdict was pretty much in on the scooter industry before the virus arrived." Companies without major backers will go under, he expects, while deeper-pocketed businesses will pare back to bare minimums.

Emily Castor Warren, a principal and director of policy at the transportation planning firm Nelson\Nygaard and a former director of policy at both Lyft and Lime, agreed that the pandemic could be a death knell for scooter businesses with large overhead costs, especially those that were already in an uncertain financial position. “I think it’s pretty dire," she says. “If these lockdowns persist, they’re going to have to, at the very least, undertake major layoffs to core teams, because the one cost they can’t bring down to zero is salaries for headcount and real estate for their offices."

The short-term outlook may not be so precarious for every micromobility company. Wheels, a startup that operates dockless electric minibikes in 17 cities in Europe and the U.S., raised $50 million in October in a funding round led by DBL Partners.The company announced on March 27 that it will roll out vehicles with self-cleaning handlebars and brake levers that can be used for delivery services and other essential uses, while its shared bikes are suspended until the end of March. The company has partnered with NanoSeptic, which has developed the self-cleaning surface. The technology uses mineral nano-crystals that continuously oxidize organic contaminants.

Scooter operator Spin hasn’t felt the same capital pressure as some of its peers—it’s owned by the Ford Motor Co. Until this week, Spin was the sole scooter provider to maintain normal operations—in its case, serving 66 U.S. cities and 12 college campuses—but it changed course on Tuesday. The company will retain scooters only in Austin, Baltimore, Denver, Detroit, Los Angeles, Portland, Ore., San Francisco, Tampa, and Washington, D.C.

“We have made the decision to pause our operations, as of today, in all other cities due to significant demand drop off as communities combat the fast-spreading virus," the company’s co-founders wrote in a Medium post. “This pause will remain in effect until further notice." Spin’s communications staff couldn’t clarify which specific markets would be losing vehicles, and Ford’s communications team rebuffed multiple requests for interviews with executives.

Molly Turner, a lecturer in business and public policy at the University of California at Berkeley and an adviser to technology startups including Spin, said the cities the company is continuing to serve may indicate where it’s had the greatest financial success to date. The markets Spin is pulling out of may show “where scooters weren’t a viable business or didn’t have enough penetration to succeed without the special partnerships or promotions that are impossible right now," she says.

That may be the case for all companies in question, as travel right now, no matter what the mode of transportation, has come to a near standstill. Several scooter operators, including Jump, Lime, Spin, and Wheels, are considering opportunities to partner with local governments or essential service providers as a way to continue operations, as residents avoid buses, trains, and other public transit under shelter-in-place mandates. New York City saw ridership on its Citi Bike system jump 67% in mid-March, after Mayor Bill de Blasio announced social distancing guidelines. On March 21, ridership on the city’s subway, the nation’s largest mass transit system, was down 87% from the same time last year.

Some investors view the decline in transit use as one reason for optimism about the mid-term prospects for micromobility. Assuming commuters remain skittish about crowding into buses and subway cars after the shelter-in-place orders lift, scooter and e-bike companies could take the opening to push for looser regulations and the reversal of the scooter bans ordered in some world cities, says Bradley Tusk, a co-founder and managing partner of Tusk Ventures and an investor in Bird. “With warming weather, better needs, and arguments for legalization and less saturated markets, [and] with companies like Lime contracting, there’s a legitimate opportunity over the next 3-6 months," he wrote in an email.

An additional upside could come in selling or leasing scooters and e-bikes directly to riders, says Niko Bonatsos, managing director at General Catalyst, an early-stage venture capital fund that hasn’t invested in dockless rentals. “Right now we hate each other and can’t stand each other’s company, and getting an Uber or grabbing someone else’s shared scooter might not be the best idea," he said. “But if you have your own bike, now is the time to use it." Bird offers a monthly leasing program, as does the electric moped startup Zebra.

For cities that have come to value shared micromobility services as a sustainable transportation option, subsidizing them may be the only way to secure their existence long-term, Castor Warren says. Some traditional docked bikeshare systems, including those in Boston, Chicago, and Washington, D.C., are owned by local governments but operated by Lyft. “In that model the city has more ability to ensure continuity of operations and ensure that service will be provided to the public, because they’ve extended their own resources, even if the bottom falls out of the economy," she says.

Such a scenario would prove what skeptics have said about dockless scooters and ride-hailing companies from the start. History has shown that establishing a new transportation service often requires massive subsidies from investors or governments.

For now, even though they may be allowed to continue to operate in many cities, the scooter companies are going it alone. Says Turner: “They’re not getting a bailout from Congress."