It was a scene of widespread carnage as battery parts from the Tesla Model 3 flew into nearby homes and a wheel came off and rammed against a water pipeline, causing flooding.
By : HT Auto Desk
| Updated on: 20 Nov 2020, 09:10 AM 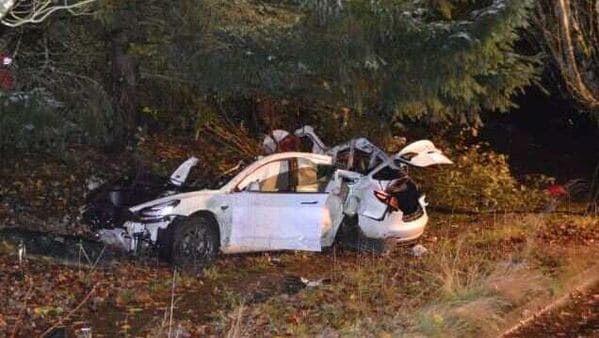 A Tesla Model 3 bore a shattered look in an Oregon city when its driver allegedly crashed it into several trees at a speed of about 160 kmph, sending its batteries flying and debris spattered across the scene of the incident. It is reported that the driver was stoned but that he somehow managed to get out of the heavily damaged Tesla EV and escape before being eventually caught by law enforcement officials.

The Corvallis Police Department put out the images of the battered Tesla Model 3 on its social media platforms, serving a grim reminder of just how dangerous driving at high speeds and in an inebriated - stoned in this case - could be.

It is reported that the driver slammed the Tesla into a utility pole and a telephone junction box, apart from the trees. Such was the intensity of the impact that some of the battery parts that came off the EV broke through the window of a house nearby.

It is also being reported that one of the wheels came off the car and rammed into a water pipe of a nearby building, causing it to break and cause flooding in the area.

Somehow, the driver only suffered minor injuries, managed to make his way out of the wreckage and put some distance between him and the scene of the accident. Cops are learnt to have eventually nabbed him three blocks away from here.

The accused now faces multiple charges which include reckless driving, hit and run and criminal mischief. As for this particular Tesla Model 3, it is damaged to an extent that repairs, quite obviously, won't be possible and this unit will be confined to the junkyard.