Delhi Transport Minister Kailash Gahlot appealed to people to cycle and walk to nearby areas instead of using motor vehicles.
By : HT Auto Desk
| Updated on: 29 Nov 2021, 09:43 AM 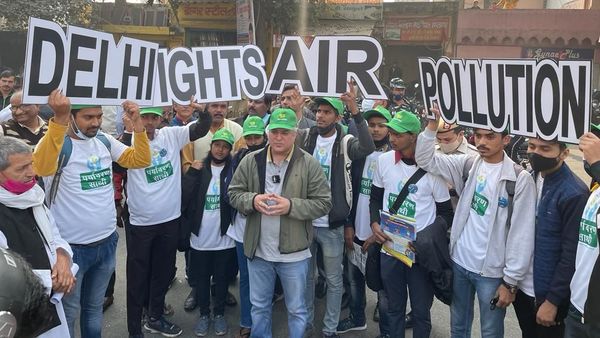 Delhi Transport Minister Kailash Gahlot appealed to the residents of the national capital to stop depending on private vehicles in order to help reduce pollution while speaking at a neighbourhood "Raahgiri Day" programme in outer Delhi's Najafgarh. The event was organised by the Dialogue and Development Commission of Delhi (DDCD) on the theme of "Yuddh Pradushan Ke Viruddh".

The theme of the Raahgiri Day event is part of Delhi government's ongoing awareness campaign against pollution which was recently launched by Chief Minister Arvind Kejriwal. The campaign aims to engage and encourage citizens to take individual responsibility for reducing air pollution by cutting down on the usage of private vehicles by at least one day a week.

This event was the second of the six Raahgiri days being hosted in Delhi over a period of three months with the theme "Yuddh Pradushan Ke Viruddh" to spread awareness about pollution. “We have all witnessed Delhi's pollution and can understand why we need to reduce the use of private motor vehicles to reduce our share of pollution," said Jasmine Shah, vice-chairperson of the DDCD.

During the Raahgiri Day events, streets are opened for the public and are kept completely free of traffic between 7.30 am and 10.30 am. There are activities like walking, running, cycling, skating, street games, music bands, painting, dance, performing arts, yoga, aerobics and zumba, among others.

While attending the event, Gahlot recalled his childhood days and how he and his friends would cycle to the markets several times a day. Arriving at the venue on a cycle, he also appealed to people to cycle and walk to nearby areas instead of using motor vehicles. "The Delhi government is committed to making the roads safer for pedestrians and our efforts to convert the traffic intersection at Rajghat into a pedestrian-friendly zone is one such example," he added.