The tactical urbanism trial at Rajghat stretch entails surrounding it with plastic barriers, spring posts and cones to reduce exposure of vulnerable road users to the traffic.If the trial goes well, the Delhi government will launch it at the other 20 locations in the city.
By : HT Auto Desk
| Updated on: 24 Nov 2021, 09:36 AM 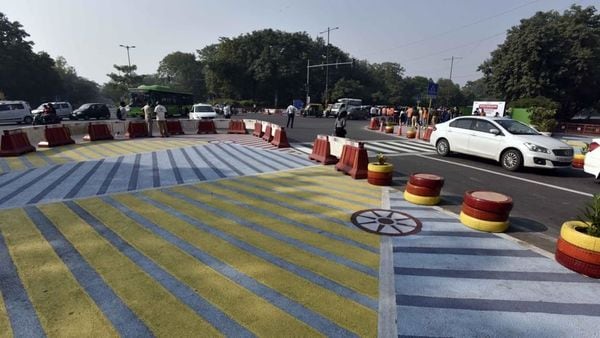 Delhi government has initiated the 'tactical urbanism trials' at Rajghat to improve road safety and reduce accident fatalities. The Rajghat intersection in central Delhi area has been redesigned to make it more pedestrian-friendly, and is a part of the government's project to establish ‘zero fatality corridors’ on accident-prone stretches in the city.

Inaugurating the tactical urbanism trials, transport minister Kailash Gahlot informed that 20 such locations in the city have been taken into consideration. All these locations are accident prone and have had cases of accidents.

The tactical urbanism trial at Rajghat stretch entails surrounding it with plastic barriers, spring posts, cones, and other such equipment in order to reduce exposure of vulnerable road users such as cyclists and pedestrians to the traffic, and increasing walking space for pedestrians. If the trial goes well, the government will launch it at the other 20 locations in the city.

While speaking to media at the inauguration, Gahlot elaborated that the trials are “temporary, quick and relatively low-cost interventions, which test out urban design, transportation planning and infrastructural changes for improving road safety".

The project at Rajghat intersection has been undertaken in collaboration with the Delhi traffic police and NGOs SaveLife Foundation and Swayam. It is being worked on as a part of the government’s ‘zero fatality corridor’ (ZFC) project. The aim of the project is to tie up with stakeholders to work on the city’s most accident-prone stretches through interventions, trying to alter motorists’ behaviour and making roads safer for pedestrians and cyclists.