According to realtime data of the Delhi government, currently there are 597 charging stations, 825 charging points and 165 battery swapping facilities in the city.
By : HT Auto Desk
| Updated on: 24 May 2022, 07:51 AM 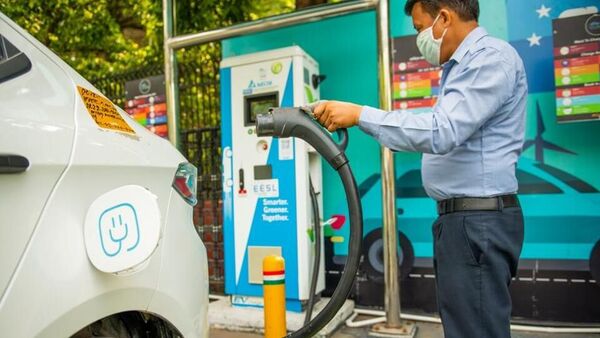 File photo of an EV charging station in Delhi

Delhi government is nearing the completion of setting up 100 public charging stations for electric vehicles in the city, and all of them are likely to become operational by July, officials told PTI. The civil infrastructure for more than 95 of the 100 charging stations has been completed. The setting up of charges and other electrical work like power connection has started now.

These 100 EV stations will have a total of 500 charging points for the electric vehicles. The vehicle owners using the public charging points will have to pay at the rate of ₹2 per unit, making it the lowest EV charging fee in the country.

Most of these public charging stations are being set up at metro stations to facilitate people who use both private vehicles and metro trains for daily commute. Land was handed over after agreement to four concessionaires selected through open bidding for setting up the charging stations.

Under the public-private partnership model, the Delhi government has provided land, cabling and transmission infrastructure while the equipment and manpower have been provided by the concessionaires, officials said.

Delhi has been at the forefront of pushing adoption of electric vehicle in the national capital to reduce pollution levels in the city. Under its EV policy, the government has targeted 25 percent electric vehicles in total vehicle registrations in Delhi by 2024. It had launched its EV policy in August 2020, and since then EVs comprise more than 12 percent of total vehicle sales in the city.