This was part of a safety drive by the Goa Police to create awareness about the importance of motor vehicle norms.
By : IANS
| Updated on: 25 Dec 2019, 11:50 AM 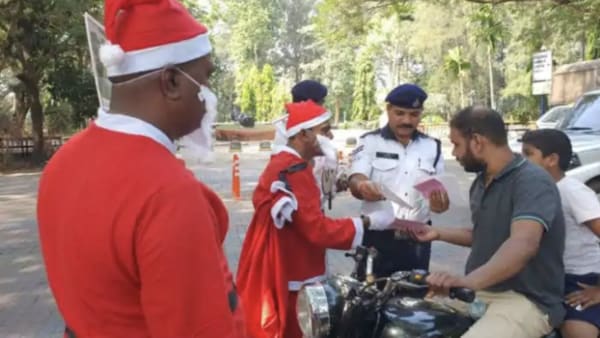 In a unique initiative, traffic violators in Panaji were offered chocolates and not "challan" (fine) on Tuesday by the traffic policemen dressed up as Santa Claus.

This was part of a safety drive by the Goa Police to create awareness about the importance of motor vehicle norms, ahead of the festive season.

According to inspector in-charge of the Panaji Traffic Cell Brendon D'Souza, the aim of the initiative was to create awareness about following the traffic norms and considering the festive season, the portly, amiable Santa Claus was best suited to reach out to the hearts of the traffic rule violators.

"So many lives are lost, because road users do not wear their helmets, they do not wear seat belts. They ride or drive recklessly. We used the Santa Claus to promote safety on the Goan roads," D'Souza told reporters.

"During the festive season, we thought that if Santa Claus gives this message, it will go down the hearts and minds of the people that they should be safe... The Santa Clauses are our traffic policemen. They are wearing Santa Claus costumes. We stopped the violators, but we did not challan them, but, instead we offered them a chocolate," D'Souza said.

As part of the drive, along with the chocolate, the violators were also shown traffic related posters and photographs about how traffic violations can lead to the accidents.

Christmas is one of the major festive occasions in Goa, where Christians account for more than one-fourth of the state's population.