China may have sold record 1.7 million alternate-energy vehicles this year

Companies dealing in new energy vehicles such as Nio Inc, BYD and Tesla Inc are expanding their manufacturing capacity in China.
By : HT Auto Desk
| Updated on: 04 Sep 2021, 06:32 PM 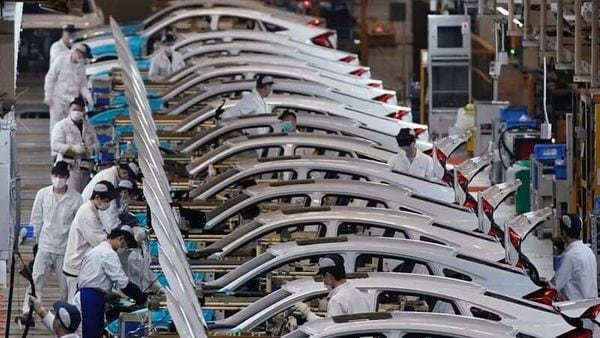 This information was conveyed by the vice-minister at China's Ministry of Industry and Information Technology, at an industry conference in Tianjin that was hosted by China Automotive Technology and Research Center (CATARC). New energy vehicles (NEV) include battery-electric, plug-in hybrid and hydrogen fuel-cell vehicles.

Companies that are dealing in NEV such as Nio Inc, BYD and Tesla Inc are expanding their manufacturing capacity in China have been encouraged by the government's efforts to promote greener vehicles to cut the emission of carbon gases. The minister also informed that the overall auto sales are expected to hit over 16 million vehicles between January and August, up around 10 percent from 2020. However, he did warn the Covid-induced global semiconductor shortage is still a factor that may impact the country's auto production.

He also informed that authorities will also look out to curb blind construction of new energy vehicles and will try to improve the supply of key metals including cobalt, lithium and nickel. The minister also said in the report that automakers should protect customer privacy and vehicle data security.

As per another report, China is also preparing to adopt strict measures to guard against various data security risks posed on the Internet by the development of intelligent vehicles. Intelligent vehicles can be risky as they involve the unauthorised collection of personal data, said an official.