Home Auto News Bugatti Vs Rafale: A Drag Race Not For The Faint Hearted

Bugatti vs Rafale: A drag race not for the faint-hearted

Bugatti shared a video of its limited edition hypercar Chiron Pur Sport in a drag race against Dassault Rafale Marine fighter jet.
By : HT Auto Desk
| Updated on: 21 May 2021, 12:33 PM 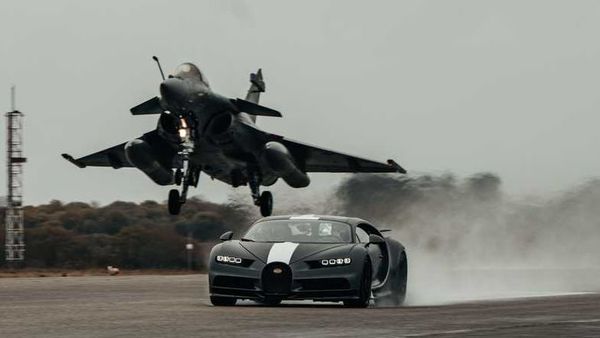 It could be easily described as the mother of all drag races when a Bugatti Chiron Pur Sport enters a fight with Dassault Rafale fighter jet. Bugatti has revealed a video and several images showing off the duel that took place at Dassault's headquarters in France recently.

Involved in the drag race was a limited edition of the Chiron Pur Sport with its 8.0-liter W16 engine, capable of churning out a whopping 1,500 hp and 1,600 Nm of torque. On the other hand was the Dassault Rafale fighter jet of the French Navy. The two turbojets of the fighter plane are capable of producing nearly 58,550 newtons of thrust, which is equivalent to approximately 5,727 hp. No match, one would say, compared to even the most powerful hypercars ever built.

With its 16 cylinders, the Bugatti Chiron Pur Sport is capable of hitting around 490 kmph as its top speed. But it is woefully short of what the Dassault Rafale fighter jet which can reach Mach 1.8, or around 1,912  kmph.

Despite the yawning gap on papers, the Bugatti Chiron was sport enough to take on the challenge as it lined up besides the Rafale fighter jet on the runway, ready for the drag race.

As for the Rafale, it was a different story as expected. After 150 meters, the fighter jet reached a speed of 165 kmph but stayed behind. When it reached the 350 metres mark on the tarmac, it had increased its speed to 210 kmph and finally took off at a ground speed of around 260 kmph after 450 meters, leaving the Chiron on the tarmac.

"I moved away from the Rafale for the first few hundred meters," explained Pierre-Henri Raphanel, who drove the Bugatti hypercar. He said, "but after a few hundred more meters, he was about 20 meters above and next to me in the tunes. An incredible and fantastic spectacle."