At the BMW stable, sales of plug-in hybrid and fully electric cars like the iX sedan jumped 70% to 328,316.The victory of BMW over Mercedes partially shows how component shortages have affected global car sales.
By : HT Auto Desk
| Updated on: 13 Jan 2022, 10:11 AM 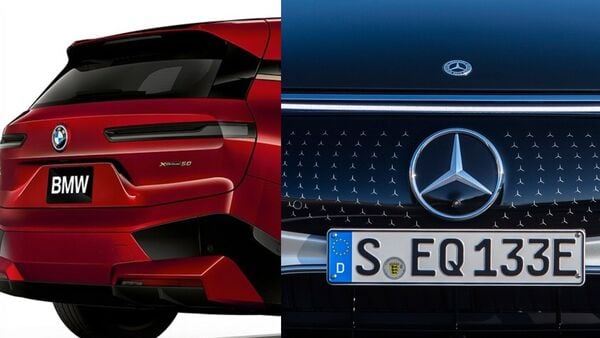 Luxury carmaker BMW has beaten its longtime rival Mercedes-Benz to grab the title of the best-selling luxury carmaker for the first time since 2015. The carmaker achieved the milestone after better navigating the semiconductor shortage that has caused headwinds in the global auto industry.

While deliveries of BMW-branded cars saw a jump of 9% to a record 2.2 million last year, they were more than Mercedes’s about 2.1 million units. The Daimler AG-owned brand's output shrank 5% during the period as lack of chips grew much worse during the second half of the year.

At the BMW stable, sales of plug-in hybrid and fully electric cars like the iX sedan jumped 70% to 328,316 cars as compared to a 69% increase at Mercedes. The former more than doubled its sales of full EVs last year and seeks to repeat that feat in 2022. “In 2022 we want to continue our profitable growth and we will systematically expand our range of fully electric vehicles," Pieter Nota, responsible for sales at BMW, said in a statement.

The victory of BMW over Mercedes partially shows how component shortages have affected global car sales. Mercedes believes that supply shortage will continue to affect the industry during the first half of the year and urged more capacity to be added globally. BMW also expects the issue to continue over the next six months.

Last week, Toyota Motor surpassed General Motors to become a top-seller in US after 90 years. Toyota sold 2.332 million vehicles in the US last year whereas General Motors closed its books with sales of 2.218 million units in 2021. Deliveries of electric vehicles were a bright spot for both companies as they rolled out new battery-powered models and sought to comply with tightening emissions regulations.

(with inputs from BLoomberg)