The new ABS safety feature on the Platina comes coupled with its 240 mm front disc brake.The Bajaj Platina 110 is the first in segment motorcycle to receive ABS.
By : HT Auto Desk
| Written By : Prashant Singh
| Updated on: 04 Mar 2021, 12:30 PM 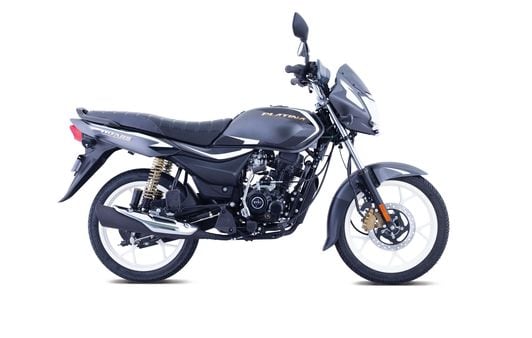 Hot on the heels of the Platina 100 Electric Start, Bajaj Auto on Thursday launched the all-new Platina 110 with Anti-lock Braking System. It has now become the 'segment first' motorcycle to receive this safety net feature. The updated commuter has been priced at ₹65,920 (ex-showroom, Delhi)

On the outside, the Platina has received a refreshed look sporting new mirrors for improved visibility as well as hand-guards. It has been introduced in three colour options - Volcanic Red, Charcoal Black, and Beach Blue and is available across all Bajaj Auto dealerships in India.

In terms of mechanicals, the bike draws power from a 115 cc, four-stroke, single-cylinder, air-cooled engine featuring an electronic fuel injection system. The engine is rated to deliver 6.33 KW (8.6 PS) of power at 7000 rpm and 9.81 Nm torque at 5000 rpm. Its transmission unit is a four-speed unit.

Apart from ABS, the new Platina also comes with the company's 'ComforTec package' which includes features such as quilted seats, a Nitrox spring-on-spring suspension and tubeless tyres. The new ABS safety on the Platina comes coupled to a 240 mm front disc brake.

Commenting on the launch Mr Sarang Kanade, President – Domestic Motorcycles Business Unit, Bajaj Auto Ltd said, “The new Platina 110 ABS offers unmatched safety by offering riders complete control over unforeseen braking scenarios. We hope that millions of Indians who ride across varying terrains & roads of the country would take cognizance of the need to keep themselves & their loved ones safe and upgrade to the best-in-segment braking technology. "

Some of the key features of the new Bajaj Platina 110 include:

"The brand Platina has an unmatched proposition of Comfort with over 7 million satisfied customers as a testament to its segment-leading attributes and now with the addition of ABS, it remains a generation ahead of its competitors," added Kanade.