Being held at the time of deadly coronavirus outbreak, many delegates and participants besides media men could be seen wearing face masks at Auto Expo 2020.
By : PTI
| Updated on: 06 Feb 2020, 09:22 AM 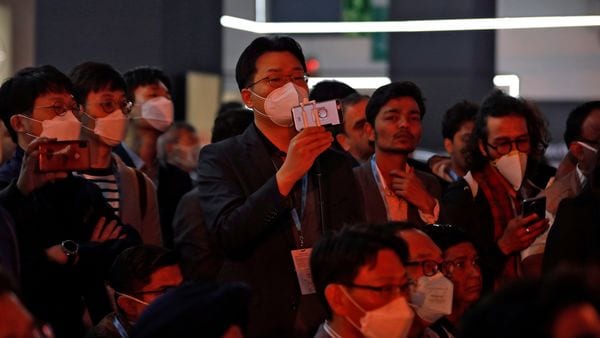 Visitors use their mobile phones to film vehicles at the India Auto Expo 2020.

India's biennial flagship motor show Auto Expo kicked off on Wednesday under the shadow of coronavirus outbreak as officials of Chinese participants stayed away from pavilions, on a day when China's Great Wall Motor announced an investment of USD 1 billion to tap into the country's auto market.

Keeping in tune with the changing landscape of the automotive industry globally which has also been reflected in India, major manufacturers such as Maruti Suzuki India, Hyundai, Tata Motors, Mahindra & Mahindra, Renault, Mercedes-Benz, Voklswagen and Skoda along with new entrants such as Kia and Hector showcased their range of electric vehicles, concepts and upcoming SUVs.

Being held at the time of deadly coronavirus outbreak, many delegates and participants besides media men could be seen wearing face masks -- a rarely seen scene in the previous editions of the expo -- while hand sanitisers were ubiquitous at the guest lounges of the participating firms.

In the first instance of impact of outbreak on Auto Expo, China's FAW Group firm automaker Haima Automobile on Wednesday cancelled its scheduled press conference as top leadership team of the company could not make it to India. One of the leading Chinese automakers, the company displayed its seven-seater MPV 7X and SUV 8S and electric vehicle E1 here at the expo.

"We had to cancel the scheduled press conference as leadership team from China could not make it to India," an Indian representative at the company's stall told PTI. The company's presser was originally scheduled to be held at 4 pm.

Notwithstanding the health scare, China's largest SUV manufacturer Great Wall Motor (GWM) announced it will invest USD 1 billion in India to tap the market that is set to be among the top three auto markets globally. The investment will be made in a phased manner in areas including research and development, manufacturing, and sales and marketing.

"We firmly believe that India will become one of the top three auto markets in the world in the next three-five years... Our aim is to establish a comprehensive ecological chain covering research, production, sales and marketing...," said Hardeep Brar, Director, Marketing and Sales of the Indian subsidiary of GWM.

He also admitted the coronavirus outbreak and subsequent advisories on Chinese travelling into India has had an impact on the participation of leadership team from headquarters.

Similarly, MG Motor India announced that it is in the process of finalising a new manufacturing plant in the country in addition to its already existing production facility in Halol (Gujarat).

Chinese firms led by the likes of Great Wall Motor, First Automotive Works (FAW) and electric bus and battery maker BYD have booked around 20 per cent of the total space of around 40,000 square metres at automobile show of the Auto Expo here at Greater Noida.

When asked about the impact of coronavirus on the auto industry, Tata Motors Managing Director and CEO Guenter Butschek said it would be known only after next week when factories of Chinese component suppliers re-open next week after an extended lunar new year holiday.

Owing to the coronavirus outbreak, India on Sunday announced temporary suspension of e-visa facility for Chinese travellers and foreigners residing in the neighbouring country and issued a fresh advisory saying anyone with travel history to China since January 15 can be quarantined.

On Tuesday, automobile industry body Society of Indian Automobile Manufacturers (SIAM) had said all Chinese companies participating at the expo have confirmed that their exhibit area would be manned by their Indian employees.

Country's largest car maker Maruti Suzuki India announced its target of selling the next one million "green vehicles" in the next couple of years as it accelerates its eco-friendly mobility drive. Maruti Suzuki India Managing Director and CEO Kenichi Ayukawa said the company has already sold a million green cars, comprising CNG and smart hybrids in the last decade.

Showcasing its concept FUTURO-e, an electric SUV, he said the car is being shown for the first time globally in India reflecting the importance of Indian customers in Suzuki's business.

Keeping up the EV drive, Mahindra & Mahindra launched the electric variant of its compact electric SUV eKUV 100 starting at a price point of ₹8.25 lakh (ex showroon Delhi post Fame benefits). It offers peak power output of 40kW, torque of 120 Nm and a range of 147 kms, ideal for city commuters.

"It is our firm belief that shared mobility would drive large scale adoption of e-vehicles and hence our product offerings would continue to redfine shared mobility space. We intend to offer widest range of vehicles to meet the needs of shared mobility," Mahindra & Mahindra Managing Director Pawan Goenka said.

Tata Motors, which showcased pre-production version of its Gravitas SUV that is scheduled to be launched in the first half of FY2021, also announced plans to roll out an electric low-floor bus and an electric truck.

"Tata Group has taken lead in driving the government's vision of electrifying India and building a comprehensive and sustainable ecosystem, by leveraging the Group's rich experience and diversified competencies. The recently launched Tata uniEVerse is a holistic approach addressing all aspects of e-mobility solutions, from infrastructure to charging network and phase wise manufacturing plan, to provide our consumers a future ready sustainable and efficient e-mobility environment,"Tata Sons Group Chairman N Chandrasekaran said.

The company is actively looking to set up exclusive outlets for its electric vehicle portfolio but has not yet taken a final call over the issue, said Tata Motors electric vehicles business head Shailesh Chandra.

German luxury carmaker Mercedes-Benz said it would launch its electric SUV EQC in India in April, while French auto major Renault also said it was working towards entering electric vehicle space in India and is likely to launch its first EV in the next two years.

Czech auto major Skoda, which has been given the responsibility of turning around the fortunes of Volkswagen group in India, unveiled Vision IN, an India specific mid-sized SUV concept car based on the MQB A0 IN platform, while Volkswagen commenced pre-booking for two up coming SUVs -- Tiguan Allspace and T-Roc -- which it plans to launch in the first half of the year.

Similarly, Hyundai unveiled new version of its Tucson SUV with an eye to capture bigger share in the premium SUV segment.