Rolls-Royce's electric aircraft will make a world-record attempt for the fastest all-electric plane with a target speed of 300+ mph.Zero-emission Jaguar I-Pace cars will act as towing and ground support vehicles for the project.
By : HT Auto Desk
| Updated on: 06 Jul 2021, 05:00 PM 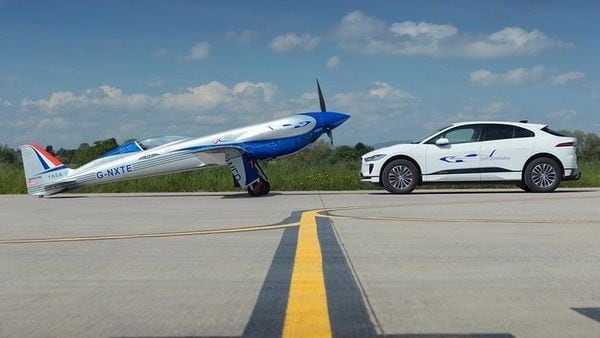 As Rolls-Royce Holdings's* all-electric plane prepares to take its first ever flight in coming weeks in a world-record attempt for flight speed, it will get ground support from Jaguar I-Pace electric cars. The zero-emission cars will act as towing and support vehicles for the carbon-neutral project.

The aviation company's 'Spirit of Innovation' all-electric aircraft is targeting a speed of of 300+ mph (480+ kmh) in its maiden flight in order to set a world record for fastest all-electric plane. The aircraft features an electric propulsion system that delivers 500+ horsepower using its most power-dense battery pack ever assembled for a plane. The battery, Rolls-Royce says, has enough power to light 250 homes at once or fly from London to Paris on a single charge.

Coincidentally, the Jaguar I-Pace has a range of 292 miles on a single charge, that is exactly the distance by road from London to Paris. The zero-emission vehicle uses two electric motors that produce a total of 394 hp thanks to its state-of-the-art 90kWh lithium-ion battery made of 432 pouch cells. 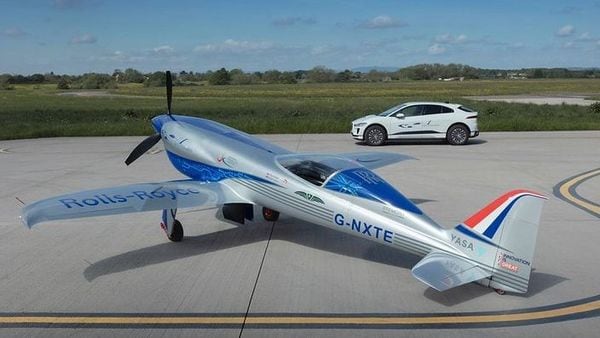 Underscoring the reason for choosing I-Pace electric cars as its ground support fleet, Rolls-Royce says that both the manufacturers are committed towards decarbonising their footprints. The aviation company has halved its greenhouse gas emissions since 2014 and is also on track to meet its 2030 target of net zero emissions from operations. Similarly, Jaguar Land Rover has a target to achieve zero carbon emissions across its supply chain, products and operations by 2039. "Rolls-Royce and Jaguar Land Rover are UK pioneers who are focused on advancing electrical technology for their respective sectors," says Rob Watson, Director of Rolls-Royce Electrical.

The 'Spirit of Innovation' electric aircraft has been created by the 'Accelerating the Electrification of Flight' (ACCEL) programme. Key partners of the programme include YASA - electric motor and controller manufacturer, and aviation start-up Electroflight. The UK's Aerospace Technology Institute (ATI), and the Department for Business, Energy & Industrial Strategy and Innovate have together funded half of the project's costs.

(*Note: Rolls Royce Holdings Plc is a completely separate company from Rolls-Royce Motor Cars which is owned by BMW Group.)