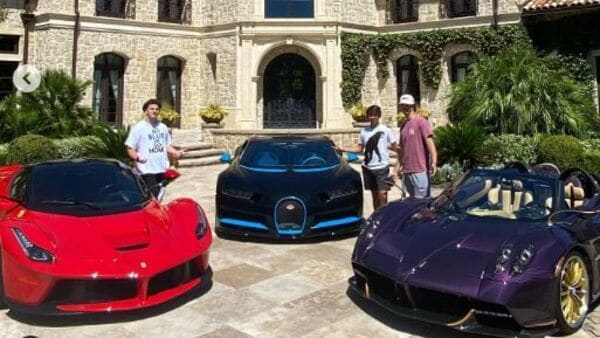 YouTuber Donald Dougher posing with his collection of luxury vehicles.

The world is full of automotive enthusiasts who splurge on luxury vehicles and revel in creating their own unique collection of marque vehicles. But it is not an ordinary narrative when a teenager is one of those auto connoisseurs. Meet Donald Dougher, 15-year-old YouTuber who is making £20,000 a month from his YouTube channel and has an envious car collection worth £10 million comprising Bugatti Chiron and Ferrari La Ferrari.

Dougher started his Donlad channel on YouTube back in 2019, and now has 600,000 subscribers as well as his hundreds of thousands of followers across Instagram and TikTok. His videos range from those on lifestyle to clothing, pranks and cars. Out of the cars he owns, one is the Bugatti Chiron, one of the most exclusive cars in the world as only 110 of the 110 Ans models were ever made.

The limited edition model was made to celebrate Bugatti's 110th birthday and its design is based around the colours of the French Flag. It is capable of accelerating from 0-62 mph in 2.4 seconds and can attain a top speed of 260 mph. It costs somewhere around £3.3million.

Another one in Dougher's collection is the Ferrari La Ferrari, which locks horns with the likes of Porsche and McLaren hyper cars. Though it is a hybrid model, its electric motors only help it go faster, helping it attain the top speed of 217mph. It costs somewhere around £1million.

Yet another exclusive addition to the YouTuber's collection is the Pagani Huayra Roadster. Its V12 engine is capable of churning out 753 bhp can attain a max speed of 210 mph. It is worth around £2.3million. At about £150,000, the McLaren 570S is a daily commuter for Dougher. With a twin-turbo V8 engine, the vehicle can churn out 570hp of power, helping it attain a top speed of 240 mph. Another notable marque that are a part of the teenager's collection is the Rolls-Royce Cullinan which starts at around £260,000.

Notably, the YouTuber is from Los Angeles, California where one must be at least 16 years old to obtain a Driving Licence (DL), meaning the teenager cannot legally drive around vehicles from his super expensive collection.