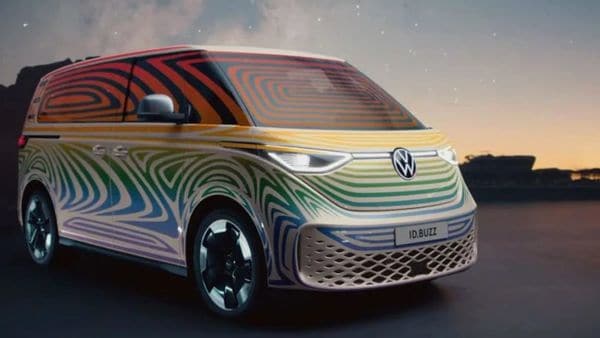 The official nameplate of the VW Bus is yet to be announced, but expect it to be rolled out as a spiritual successor to the iconic Microbus.

Volkswagen has teased the final production-spec version of the ID.Buzz concept. This model made its first appearance back in 2017. The company has now announced the debut date of the electric van which is set to break cover on March 9, 2022.

The official nameplate of the VW Bus is yet to be announced, but expect it to be rolled out as a spiritual successor to the iconic Microbus.

An icon will be reborn – fully electric & ready for road trips with you. 09.03.22! 🤩#VWIDBUZZ | @volkswagen | @VWCV_official pic.twitter.com/bm7OOnetkx

VW has posted a teaser image of the model covered in camouflage pattern and the teaser closely follows the scheme as previously witnessed on the ID.5 and related ID.4 back when these models were teased.

(Also Read: This Volkswagen pick-up is re-worked to be a hardcore off-road demon)

The upcoming all-electric van will be available in three different variants. These will be passenger, ride pooling and ride-hailing variants, claims a report by AutoNews.

In the US market, the EV will get a four-seat configuration at the rear and will be offered as a ride-hailing model. Two of the rear seats will face forward, while two will face rear in this US-market-spec model.

Volkswagen is focused to take its ID Buzz electric bus from concept vehicle towards mass production next year. It is likely to hit the international dealerships sometime in 2023, however, its India launch won't take place anytime soon.