Tesla has an exclusive lane at this state border

After moving its headquarters to Texas, Tesla currently relies on many suppliers from Mexico for its operations.
By : HT Auto Desk
| Updated on: 23 Jul 2022, 13:54 PM 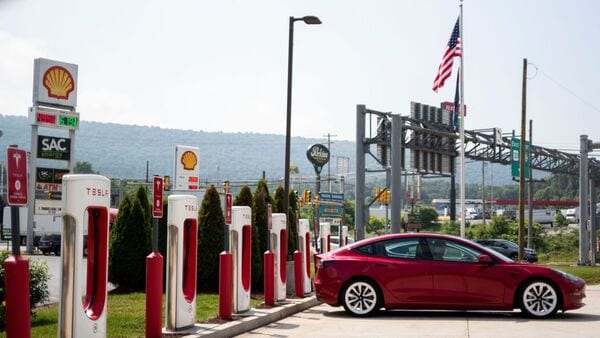 Automakers strive for exclusivity though a few manage to push the boundaries. However, Tesla quite literally made its mark on the Texas-Mexico border by convincing the Mexican state of Nuevo Leon to build an exclusive lane to allow its suppliers from the country to move across the United States. After moving its headquarters to Texas, Tesla currently relies on many suppliers from Mexico for its operations.

According to reports, the time taken to cross the border between Texas and Nuevo Leon can go up to 25 minutes. Now, Tesla getting its own lane has been advantageous for its company suppliers as they go through it in less than 10 minutes. The lane has been marked with a board that declares Tesla.

Nuevo Leon Economy Minister Ivan Rivas shared that Tesla has collaborated with six suppliers from the state that include APG Mexico, the EnFlex Corp., Faurecia and Germany’s ZF. As the two states share a border of nine miles (approximately 14.4 km) with only one crossing point, the minister reportedly stated to have a crossing which is time-efficient is immensely beneficial for both states. “And maybe there will be a lane for other companies in the future like there is for Tesla," the minister was quoted in a Bloomberg report.

In a past report, Tesla chief Elon Musk had shared the possibility of opening a factory in Mexico. However, the location for the EV manufacturing unit is yet to be ascertained. Earlier reports have also suggested chances of building the same in Canada. Tesla's Chinese battery manufacturer is looking for sites in Mexico to build its production units. Contemporary Amperex Technology Co. Ltd which is the world's biggest manufacturer of batteries for EVs is hunting two sites and it is being said that these manufacturing units will make batteries for Tesla and Ford.