Tata Avinya electric vehicle concept focuses on a premium design and sensory feelings through its styling and features, claims the automaker.
By : HT Auto Desk
| Updated on: 29 Apr 2022, 12:30 PM 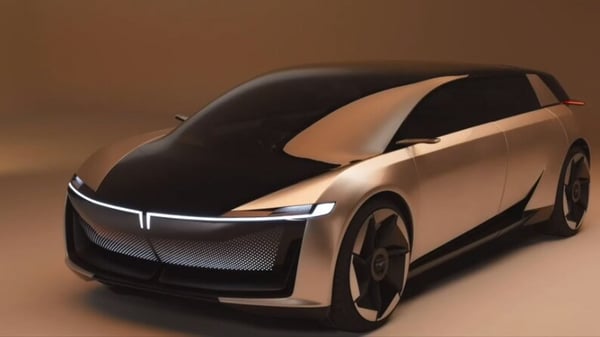 Tata Motors on Friday unveiled its new electric vehicle concept Avinya, which is based on the automaker's new Pure EV third-generation architecture. Tata Avinya is claimed to have been designed focusing on the Indian market. However, it will also target the global market, said N Chandrasekaran, Chairman of Tata Group. The carmaker also revealed that it aims to launch the Avinya EV in the Indian market in 2025, after launching the Tata Curvv EV within the next 24 months.

Tata Motors has claimed that it designed the Avinya EV following the homegrown car brand's third-generation design philosophy. The electric car concept comes with a suave styling that grabs attention easily. The concept car is a pre-production form of a premium SUV with an electric powertrain. The car gets a sleek LED strip in form of a T that signifies Tata Motors. The LED strip hat acts like an integrated LED daytime running light connecting the headlamp. The front fascia also has a large black panel, while the bumper appears sculpted.

The side profile indicates that the automaker has focused on boldness with large alloy wheels and masculinity of the SUV along with ease of getting in and out of the car with its wide-opening butterfly doors. At the rear, it gets a spoiler like sleek LED strip running the whole width of the concept that acts as the taillight. Also, there is a chunky bumper.

Inside the cabin, the Tata Avinya EV concept gets a completely different visual appearance, which is minimalist and focused on increasing space and comfort. The automaker claims that it has been designed to offer more space to the occupants, high structural safety, dust protection, and advanced driver assistance. The company also claims that it has been designed to ensure improved quality of life. It is claimed to come with a host of connectivity features, a large touchscreen infotainment system at the centre console, and an all-digital instrument cluster with a uniquely shaped steering. The seats can rotate 360 degrees, as shown in the concept.

Speaking about the performance and specification, the Tata Avinya EV concept promises more than a 500 km range. It could come with dual electric motors each powering one axle and sending power to all the four wheels. However, the production version of the SUV could also come with a quad motor setup.