Pawan Munjal, Chairman and CEO at Hero MotoCorp, was seen posing next to the Vida branding, which has been revealed for the first time.
By : HT Auto Desk
| Updated on: 04 Mar 2022, 09:19 AM 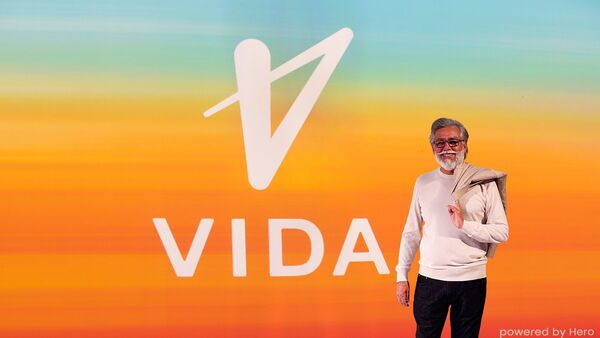 India's biggest two-wheeler manufacturer Hero MotoCorp has unveiled the logo of its new and upcoming electric vehicle brand called Vida. The company has shared a first glimpse at how the new branding looks like. Vida will debut in India with the launch of its first electric two-wheeler, to be officially unveiled on July 1.

Hero MotoCorp shared the first look at the Vida branding on its social media handles. It shows Pawan Munjal, Chairman and CEO of the company, posing next to the branding.

"Vida means life, and the brand's sole purpose is to create a positive impact on the world and move us all forward in meaningful ways. We believe the name is perfect for what we are building for our children and the next generation. This is truly the dawn of something special. In only 17 weeks from today, we will unveil our Vida platform, products and services to make the world a better place," Hero MotoCorp Chairman and CEO Pawan Munjal said in a statement.

"I will lead this initiative from the front," Munjal added.

Hero MotoCorp had earlier announced that it will roll out its first-ever electric two-wheeler this year. The company had teased the upcoming electric scooter last year in August this year as part of the Hero's 10th-anniversary celebrations.

In keeping with the relentless pursuit towards our vision – Be the Future of Mobility, our Chairman & CEO, Dr. Pawan Munjal announces to the world new brand ‘Vida’ for electric mobility. #Vida #sustainability #climatechange #vidafortomorrow #hellovida pic.twitter.com/H25cYrRoji

The new electric scooter will compete with rivals such as TVS iQube, Bajaj Chetak, Ola S1 among others. The automaker will roll out its electric vehicles from the Chitoor manufacturing facility in Andhra Pradesh. Hero will also most likely price the scooter aggressively to catch up with its rivals. Expect the scooter to come under ₹one lakh.

Hero MotoCorp had earlier signed an agreement with Taiwanese company Gogoro for battery swapping technology. The company also plans to launch a wide range of premium products. Among them, the company is reportedly working on a battery-powered motorcycle as well.