Electric Skootr championship will be gender-neutral for participation, with men and women racing together.
By : HT Auto Desk
| Updated on: 30 Dec 2021, 04:52 PM 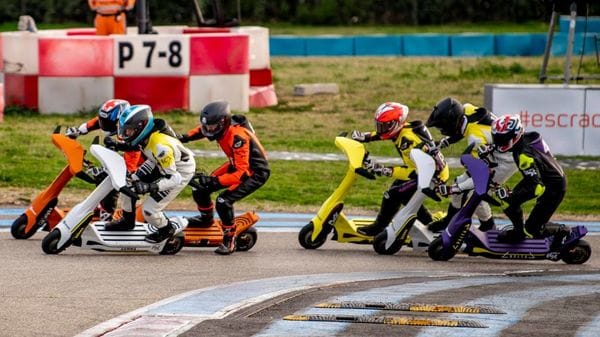 A draft for the riders is expected to be made in January 2022.

The world of motorsports is about to witness another exciting racing series. This time, not a car or motorcycle, but scooters powered by electric powertrains. Termed as electric skootr championship, this is going to be a racing championship involving those micro-mobility electric vehicles.

A draft for the riders is expected to be made in January 2022, with the identities of the first riders being released shortly. For the first two seasons, racers will be professional athletes from other sports. They are likely to be chosen from other motorsports such as MotoGP or Formula E or from extreme sports like BMX or skating.

The theory behind this strategy is to have athletes already used to high-pace racing, which will allow the organisers enough time to review performance and safety measures first, before opening entries for other participants. Also, the organisers are aiming to make these events accessible to a large demographic, unlike Formula One or Formula E or MotoGP that are considered as rich person's sport.

Another interesting fact about this championship is that the events will be gender-neutral for participation, with men and women racing together.

From 2023 a grassroots eco-system for the championship will be introduced in order to try and create junior categories from which new talent can emerge.

Speaking about the technical aspects of the championship, initially, there will be a one-make formula for the participants. This means all the competitors will have to race with the same equipment.

The Eskootr S1-X is a bespoke design race scooter that is expected to be used in this championship. This e-scooter gets twin 6 kW electric motors, a 1.5 kW battery pack. It can run at a top speed of over 100 kmph. It has the ability to corner with lean angles of up to 55 degrees and it runs on 6.5-inch wheels. The e-scooter is built with carbon fibre and minimal bodywork from flax natural fibres. The batteries and tyres are both recyclable too.