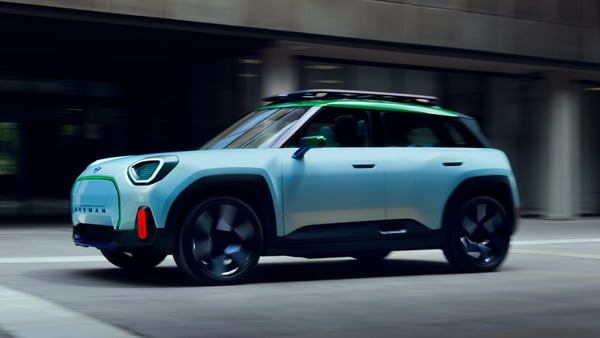 The MINI Concept Aceman will be showcased publicly for the first time at Gamescom 2022 in Cologne on August 23.

MINI Concept Aceman showcases a new design language that will be introduced in the next-generation MINI cars. The front grille is octagonal in shape and can display signs with LEDs. The grille is bordered by light green LED lighting and doubles up as a daytime running lights. Stephanie Wurst, head of the MINI brand, said, "This concept car symbolises how MINI is self-reforming towards the future of full electrification. At the same time, it reflects what the brand symbolises, such as an electric go-kart feel, an immersive digital experience, and a strong commitment to minimal environmental impact."

The MINI Concept Aceman is expected to retain about 80 percent of its design in the mass-produced model. It is expected to be a model that fills the gap between the general 3-door mini and the SUV type MINI crossovers. The overall length of the MINI Concept Aceman is more than 4 metres, stands 1.59 metres tall with an overall width of nearly 2 metres. It stands on a set of 20-inch wheels.

The MINI Concept Aceman interior comes with a modern cockpit with a dashboard that has looks like a flat sound bar extending across the entire width of the interior. It gets a circular instrument cluster and toggle switches for drive modes. “In the interior of the MINI Concept Aceman, we have concentrated on a simplistic appearance in combination with premium materials and welcoming colours. Digitisation enables us to make do with few operating elements and at the same time to maximise the experience in a way that is characteristic of MINI,"said Oliver Heilmer, Head of MINI Design.

BMW or MINI has not shared any detail about the concept car's battery, power output and range.