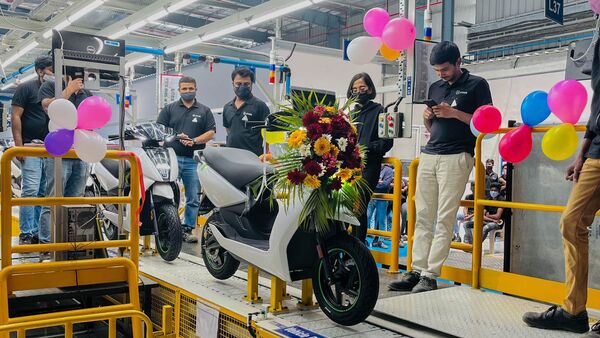 Electric two-wheeler startup Ather Energy has announced on Wednesday that it has crossed the milestone of rolling out its 25,000th unit of the 450X model from its Hosur manufacturing facility. The company said that it has achieved the feat in two years since the start of production in late January 2020. The 25,000th unit of the Ather 450X electric scooter was rolled out on 4th March 2022.

Ather 450X comes as one of the prominent electric scooters in a space where several EV startups and some legacy players have already launched their products. The Ather 450X comes with a sharp and stylish visual appearance and gets a host of features. The electric scooter gets power from a 2.9 kWh lithium-ion battery pack combined with an electric motor that churns out 8 bhp of power and 26 Nm of torque. The power and torque output of the Ather 450X is significantly higher than the older Ather 450.