The bus is finished in red colour and gets a double-decker setup just like the original buses of Mumbai.

On Thursday, Mumbai got its first electric double-decker bus, unveiled by Union Minister for Road Transport and Highways, Nitin Gadkari. The bus is manufactured by Switch India which is a subsidiary of Ashok Leyland and is called EiV 22. Best has already given an order of 200 double-decker air-conditioned electric buses to Switch. The company says that the new bus is carbon neutral and is developed, designed and manufactured in India.

Switch EiV 22 is designed for city, mofussil and tourist applications. It is using an advanced Lithium-ion NMC chemistry with modular battery options. The battery pack has a capacity of 231 kWh and uses liquid cooling. The electric double-decker bus can go up to 250 km. The battery pack can be charged in 1.5 to 3 hours. There is a permanent magnet synchronous AC motor that produces a peak power output of 320 hp and a continuous power output of 190 hp. The peak torque output is rated at 3,100 Nm. 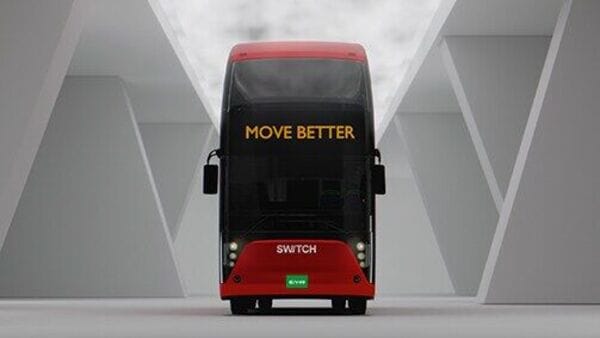 The electric double-decker bus claims a driving range of up to 250 km.

The electric bus comes with air conditioning, the company says that it would be effective in India's hot climatic conditions. There are extra wide front and rear doors, two staircases and an emergency door. The double-decker bus also complies with the latest safety standards. The company says that the bus is capable of transporting 65 seated passengers.

The bus is also compatible with ‘Switch iON’. This enables remote, real-time diagnostics and monitoring as well as world-class digital battery management tools. The bus has been specifically designed in such a way that the components are easily accessible. So, the mechanics can easily access inverters, compressors and batteries.