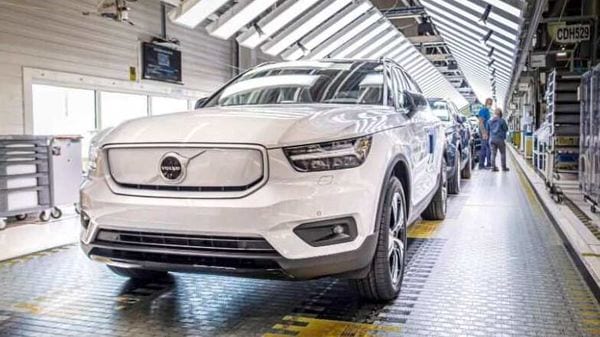 Volvo is gunning for glory in the electric vehicle space and while it has some way to go before truly taking on the might of the likes of Tesla and Volkswagen, the Swedish car maker - owned by China's Geely - is poised to hit and hit hard. While it recently started production of electric XC40 SUV, a report suggests it is also looking at a smaller XC20 e-SUV to target a wider customer base.

A report in AutoExpress suggests that the all-new XC20 EV could share the same platform as XC40 and that Volvo could look at Geely's electric platform called Sustainable Experience Architecture (SEA) for the vehicle.

XC10 and XC20 are names already trademarked by Volvo and while there is no official statement from the company yet, its plans of bringing out a new product in EV space each year till 2025 has further added credence to an electric XC20 being considered.

A smaller electric SUV makes a whole lot of sense for not just Volvo but car makers everywhere. SUVs are extremely popular in most markets and comparatively smaller dimensions could make these an ideal option for city commute - a key consideration, especially among first-time buyers.

Tesla CEO Elon Musk has already said that a smaller EV - although not an SUV - will be made as a more affordable offering while Volkswagen recently began selling ID.4 EV in several markets.

But small may not always mean affordable and Volvo boss Hakan Samuelsson underlines this. "Just because you have a small suit, it doesn’t have to be polyester," he was quoted as saying.

Samuelsson also highlighted that while SUVs will pave the way forward, the upcoming vehicles may be unlike what one sees currently. "SUVs are very popular, but it should be all-electric too. I think the SUVs in the future might not be exactly as SUVs are today. Ground clearance and off-roading capability are probably not the most important things now," he said.