Toyota Innova Crysta 2020 gets several updates to its exterior profile while promising a more premium cabin for passengers.Innova Crysta 2020 from Toyota has been dominating the MPV field of play in India for several years now.
By : HT Auto Desk
| Updated on: 24 Nov 2020, 20:22 PM

The new Innova Crysta from Toyota looks to cement its established place at the top of the MPV pyramid.

Toyota Innova Crysta facelift has officially made its India debut with the company announcing the formal launch of the enormously popular MPV at a starting price of ₹16.26 lakh, going up to ₹24.33 lakh (ex showroom prices). Available in GX, VX & ZX grades, the new Toyota Innova Crysta gets several design updates on the outside while its cabin has been refreshed to offer a more premium touch and feel, and an updated feature list.

On the outside, the updates are mainly highlighted by a new trapezoidal piano black grille with chrome ornamentation. The front bumper design has also been updated and is now sharper than before to give the Innova Crysta a more sporty profile. The diamond-cut alloys on the vehicle also go to enhance its youthful appeal.

The cabin is also home to a number of changes, crucial because this MPV is known for what it has to offer passengers. As such, a new and larger touchscreen infotainment screen has been incorporated which supports Android Auto and Apple Carplay. 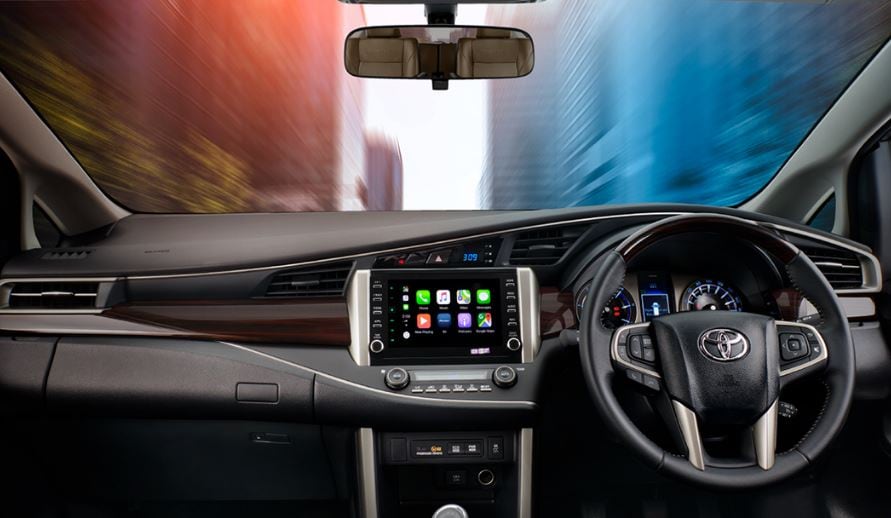 The cabin of the facelift Innova Crysta has received notable updates, primarily highlighted by a larger touchscreen.

Owners can also make use of vehicle connectivity features such as real-time vehicle tracking, geofencing and similar optional accessories. Those choosing the top ZX grade can get the vehicle with upholstery in Camel Tan colour.

The safety list of the Innova Crysta has been expanded. The vehicle gets seven airbags, Vehicle Stability Control and Hill Start Assist and a front clearance sonar with MID display to prevent collisions while parking in tight spaces.

Toyota is now hoping that the Innova Crysta is able to build on its commanding position in the MPV segment which, in recent times, have seen some traction in terms of new launches from rival car makers. There is still, really, no direct competitor to the second-generation Innova Crysta which was launched in 2016. "The Innova redefined the segment when it was introduced in India more than 15 years ago as a premium MPV that offers unrivaled comfort, convenience and looks, these skillfully combined with Toyota’s quality, durability and reliability, made it a winner," said Naveen Soni, Senior Vice President, Sales and Service, Toyota Kirloskar Motor. "The new and bolder Innova Crysta continues that legacy in accordance with our tradition of customer-first approach."

Sony further underlined that Innova Crysta has 43% of segment share and that the continuing need of families for a vehicle with comfortable cabin and capable drive will be met with by the facelift version.