Home Auto Cars News This Tech Helps Self Driving Cars See Through Fog, Snow, Even Under The Road

This tech helps self-driving cars see through fog, snow, even under the road

MIT's Computer Science and Artificial Intelligence Lab have developed a way to help autonomous vehicles see by mapping what's beneath the road using Ground Penetrating Radar.
By : Sabyasachi Dasgupta
| Updated on: 29 Feb 2020, 08:00 AM 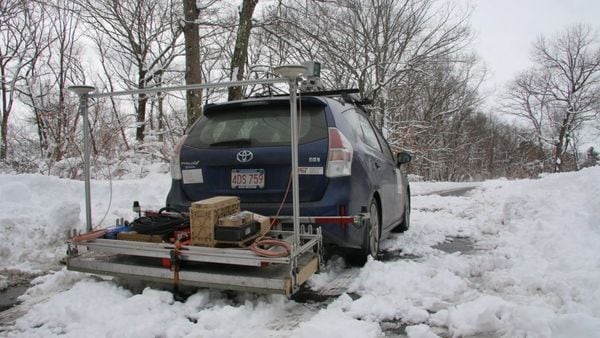 In a video released by MIT on February 24, the research team has explained how the new technology is working on a road covered in snow.

It’s always a pain to drive through dense fog, heavy rain or snow. These are climatic hazards that most parts of India face from time to time. Massive pileups on highways due to fog is quite regular especially in the northern part of the country. And the casualties in such road accidents keep increasing year on year.

While self-driving cars are far from reality in India, it gets worse for autonomous cars to manoeuvre through in such trying road conditions. But here is a technology that can help your self-driving car to see for you, identify landmarks and guide you to your destination safely, even in poor visibility conditions.

Massachusetts Institute of Technology (MIT) is working on self-driving technology that allows cars to see below the surface of the ground up to a depth of ten feet. This helps the self-driving car to determine where it is located or positioned - especially in dense fog, heavy rain or snow.

In a video released by MIT on February 24, the research team has explained how the new technology is working on a road covered in snow.

A team from Computer Science and Artificial Intelligence Lab in MIT has developed a system that uses a technology named “ground-penetrating radar" (GPR) to send electromagnetic pulses underground.

The new system uses a particular form of GPR instrument which the MIT researchers have termed “Localizing Ground Penetrating Radar" (LGPR). This technology will quantify specific elements and compare to the map that it has already created so that it can identify its location without the help of cameras or lasers.

“If you or I grabbed a shovel and dug it into the ground, all we’re going to see is a bunch of dirt. But LGPR can quantify the specific elements and compare that to the map it’s already created so that it knows exactly where it is," Teddy Ort, lead author of the research paper, was quoted as saying by The Robot Report. Ort is a PhD student at MIT.

A report by ExtremeTech says that the technology can also work inside a parking garage. The concrete, reinforcing metal bar and conduit at a garage creates the same kind of unique digital signature like in a highway.

The self-driving cars available at present rely on cameras and light detection sensors (LIDAR) to navigate.