This Hyundai electric car has wheels that can rotate 90 degrees

While cars usually allow rotation of approximately 30 degrees, the Hyundai Mobis e-corner module can go up to 90 degrees. This feature allows the vehicle to move in crab mode which is helpful in tight spots.
By : HT Auto Desk
| Written By : Sabyasachi Dasgupta
| Updated on: 28 Oct 2021, 09:19 AM 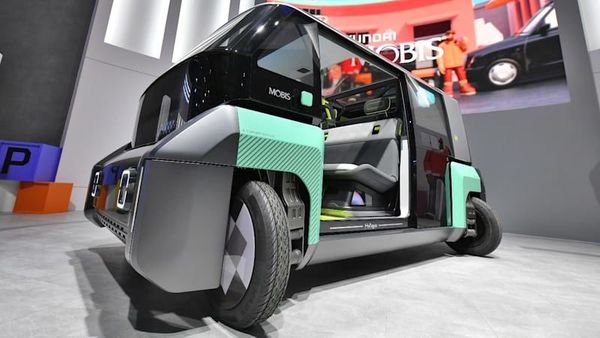 In its press release, the Korean supplier indicates that it has successfully developed a prototype of an electric corner module that combines the steering, braking, suspension and steering systems at each wheel. This corner module was first unveiled at CES 2018 in Las Vegas as a concept system, still in a very early stage of development. Over the past three years, Hyundai Mobis has renewed the design to make it a practical product that can be implemented in real vehicles and has developed the electronic control unit (ECU) that controls the technology it includes.

While traditional mechanical axles are limited to a wheel turn of approximately 30 degrees, e-corner modules go up to 90 degrees. This feature allows unique vehicle movements, such as crab mode or full rotation on its axis without the need to move the wheels.

Cars generally allow a rotation of about 30 degrees. Usually, drivers cannot easily manoeuvre in narrow alleys and park in tight spaces, making it difficult for passengers to get in and out.

"Once the reliability verification and feasibility studies on mass production are completed, Hyundai Mobis will begin placing mass production orders from global automakers for implementation," the company said in a statement.

The Seoul-based company plans to build a skateboard to collect the four e-corner modules by 2023 with the aim of integrating them with autonomously built vehicles after two years.

The corner modules are currently in the testing phase to verify their reliability . In parallel, Hyundai Mobis is conducting a feasibility study for future mass production.