Bolstered by incentives and subsidies galore, small EVs are dictating terms in an automotive world still grappling with challenges thrown up by Covid-19.
By : Bloomberg
| Updated on: 20 Jul 2020, 04:32 PM 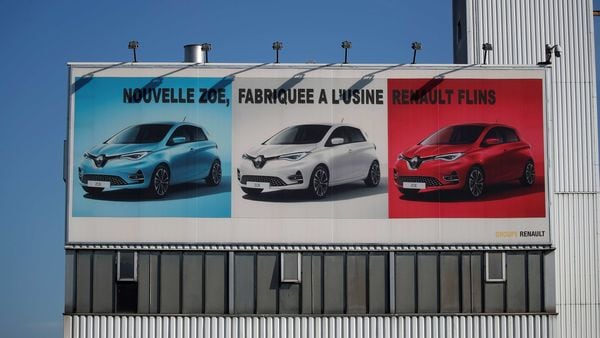 A placard showing Renault Zoe cars is seen at the Flins plant of French carmaker Renault in Aubergenville, west of Paris.

Sales of Renault SA’s all-electric Zoe car jumped 38% in the first half, a rare bright spot amid the grim fallout of the coronavirus pandemic

Most of the deliveries were made in Europe, where the Zoe became the best-selling electric car thanks in part to generous government incentives, the French automaker said Monday in a statement.

Renault’s overall sales in the period fell by more than a third, to about 1.26 million vehicles, because of lockdown measures in countries from Italy to Russia. That’s still better than cross-town rival PSA Group, whose sales dropped 46% to 1.03 million vehicles.

“We are starting the second half of the year with a very high level of orders, a satisfactory level of inventory, a rising price positioning across the entire range," said Denis le Vot, the company’s head of sales and marketing.

Renault was a big beneficiary of subsidies that France -- its biggest market -- implemented last month to get consumers to switch to cleaner cars. In Europe, customers ordered about 11,000 Zoes in June alone, bolstering Renault’s bid to meet more stringent emissions rules this year.

Renault, like its peers, has been hit hard by Covid-19, which shuttered showrooms and factories around the world. The company has announced a sweeping cost-savings plan, and the French government’s aid is aimed at saving jobs in the industry.

Renault’s sales dropped by a fifth in Russia, its second-biggest market, by 29% in India and by 47% in Brazil, according to the statement. A bright spot was South Korea, where sales climbed 51% as buyers snapped up the company’s newly introduced XM3 SUV.

Renault’s new Chief Executive Officer Luca de Meo took the reigns this month after the company announced a plan to eliminate about 14,600 jobs and lower production capacity by almost a fifth.

The cuts include trimming 4,600 positions in France, or about 10% of the carmaker’s total in the country. The plan has sparked an outcry from labor unions and criticism from the state, its most powerful shareholder.