Home Auto Cars News Tesla Has A Cybertruck For Kids. It's Called Cyberquad

Tesla has a Cybertruck for kids. It's called Cyberquad

While Tesla is yet to come out with a clear date to start production of Cybertruck for the markets, the US-based electric vehicle manufacturer has launched Cyberquad for children.
By : HT Auto Desk
| Updated on: 02 Dec 2021, 12:13 PM 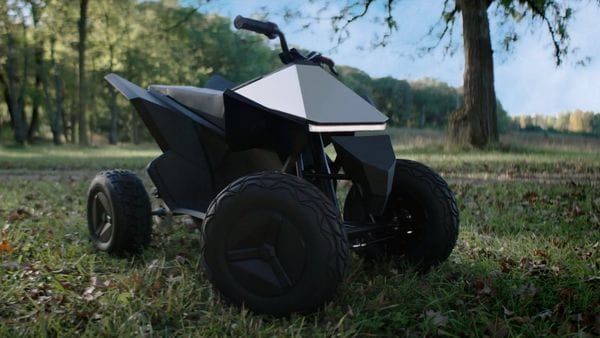 Tesla has launched Cyberquad, a four-wheel electric car inspired by Cybertruck, for children at a price of $ 1,900.

Cybertruck can wait. For now, Tesla has released an electric car inspired by Cybertruck. It is called Cyberquad, and it is meant for children. It is a four-wheel all-terrain vehicle powered by electric motor.

The Cyberquad, though meant for kids, can also be used by adults if you weigh less than 68 kgs. Inspired by Tesla’s Cybertruck design, the four-wheel ATV has a full steel frame and LED headlights, with the front face reminiscent of the Cybertruck’s appearance.

The Cyberquad comes with cushioned seat, which can only sit one at a time. It also comes with adjustable suspension with rear disk braking as well as LED light bars.

Do not mistake the Cyberquad as a toy car. It is powered by lithium-ion battery which is used in electric cars too. The 36V lithium-ion battery has the potential to offer a range of up to 24 kms on single charge. It takes about five hours to completely recharge the vehicle through a regular wall outlet.

The top speed of the Cyberquad is configurable depending on the rider’s comfort. It can vary between 8 kmph and 16 kmph. It also has a reverse mode with the top speed being 8 kmph.

Tesla is currently working on its flagship Cybertruck, which the EV maker's CEO Elon Musk claims will feature Tesla's flagship tech for future, meaning it will be a technology powerhouse. Tesla claims Cybertruck has already secured bookings for 1.3 million units, worth thrice the GDP of Nepal. However, there has been a delay in its production, which has been pushed back to 2023.

Tesla Cybertruck had been showcased for the first time ever in November of 2019. Tesla claims Cybertruck has a range of nearly 950 kms on single charge, acceleration to 100 kmph in 3 seconds and capability to tow up to 6,300 kilos

The Cybertruck will cost as much as $39,900 for the base single-motor version and $69,900 for the tri-motor range-topper. The vehicle claims to have a range of nearly 950 kms, acceleration to 100 kmph in 3 seconds and capability to tow up to 6,300 kilos.