Cybertruck from Tesla is touted as a capable pick-up truck with the performance of a sportscar.Tesla will manufacture Cybertruck at its Gigafactory in Texas.
By : HT Auto Desk
| Updated on: 28 Jul 2021, 10:55 AM 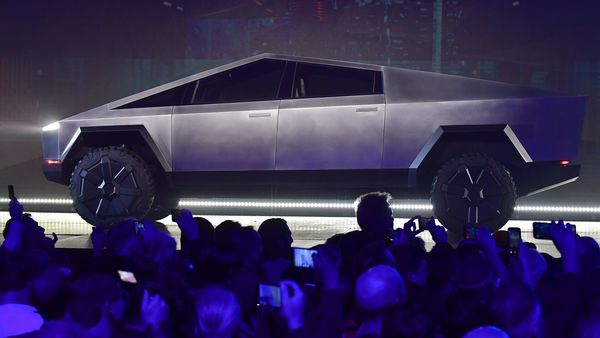 Tesla Cybertruck was first showcased to the world back in November of 2019 and while it generated a massive buzz in the automobile world, numerous delays in starting production has been seen as a damp squib by many. Factors such as shortage in semiconductor chip, the pandemic and roll out of other Tesla models are being seen as reasons for the delay which now could push timelines well into 2022.

(Also read - Tesla's $400 million camera deal with Samsung could be for Cybertruck: Report)

Cybertruck from Tesla is touted as a capable pick-up truck with the performance of a sportscar. While its claimed range of over 400 kms, acceleration to 100 kmph in 6.5 seconds, towing capacity of more than 3,400 kilos - among other highlights - have made it a much-awaited EV, its unorthodox design is what has been a major talking point.

The production version of Tesla Cybertruck isn't expected to make radical changes to the exterior design of the EV that was showcased in 2019 but those who have booked a unit continue to have a rather prolonged wait.

Media reports in the US suggest that Cybertruck production could follow the production of Tesla Model Y at the company's Gigafactory in Texas. "Cybertruck is at a stage where we finished basic engineering of the architecture of the vehicle," Lars Moravy, Vice President of vehicle engineering at Tesla, was quoted as saying by Electrek. "With the Cybertruck, we are redefining how a vehicle is being made. As Elon said, it carries much of the structural pack and large casting design of the Model Y being built in Berlin and Austin. Obviously, those take priority over the Cybertruck, but we are moving into the beta phases of Cybertruck later this year and we will be looking to ramp up production at Giga Texas after Model Y is up and running."

For anyone then who may have been awaiting news of Cybertruck production beginning this year would be better advised to wait on. There are over one million orders for the EV pick-up vehicle and once launched, it will compete against the likes of Ford F-150 Lightning, GMC Hummer EV, Rivian R1T, among others.