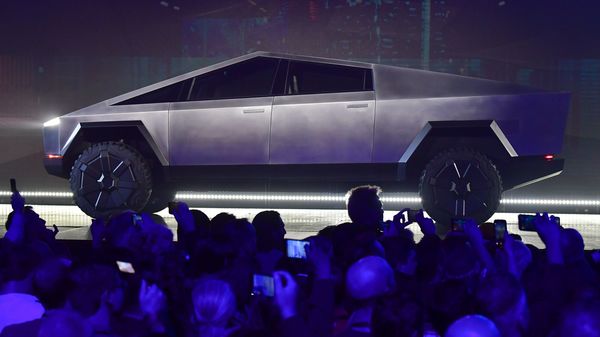 Cybertruck Owners Club has claimed that the pre-orders for the Tesla Cybertruck have reached five lakh, an average of almost 6,000 each day since November 2019.

After the unveiling, Tesla started taking pre-orders for the truck with a $100 deposit per reservation, news portal Electrek reported on Thursday.

As per report, around 17 per cent of reservation holders want the single motor Cybertruck, which is the less expensive version starting at just $40,000.

The rest 83 per cent want the dual motor and tri-motor versions which starts at about $50,000.

Also Read: Elon Musk could send a Cybertruck to Mars

It comes with six seats and features armoured glass and ultra-strong panels that are made of the same alloys found on spacecraft.

Production of the tri-motor variant of the cybertruck is expected to begin in late 2022.

The lucrative full-size pickup market in the U.S. is dominated by the Detroit 3: Ford Motor Co.’s F-150, Fiat Chrysler Automobiles NV’s Ram 1500 and General Motors Co.’s Chevy Silverado. Japanese automakers have spent two decades and billions of dollars to get in on the gravy train, but U.S. brands still control almost 92% of the half-ton segment, according to IHS Markit.

Elon Musk unveiled Tesla’s eagerly awaited electric pickup truck in November last year at a grand event. But the launch didn’t go as planned, ending with two smashed windows and the hashtag #cybertruck trending on Twitter for all the wrong reasons.

In the demo, Tesla chief designer Franz von Holzhausen initially took a sledgehammer to the truck, which withstood the impact. Then it all went wrong.

Von Holzhausen took a metallic ball in his right hand, wound up and tossed it at the truck -- smashing the front driver-side window, stunning the audience and viewers live streaming the event.