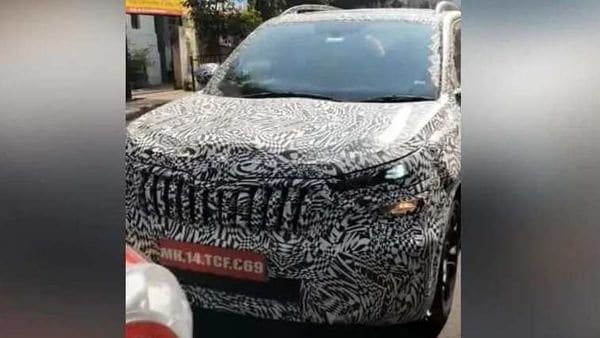 The Skoda Vision-IN SUV is expected to roll out in the market by mid-2021. Image Credits: Youtube/Tushar Atre

Skoda's first product under the VW Group's India 2.0 strategy is bound to roll out in the first half of 2021. It is going to be none other than the production version of the Vision-IN SUV which was also showcased at the Auto Expo earlier this year. Now the same model has been caught getting tested on the Pune roads ahead of the mid-2021 launch.

(Also Read: Skoda Auto India to hike car prices by up to 2.5% from January 1)

The upcoming Skoda SUV will be one of the first models to be built on the company's new MQB A0-IN modular platform. For the record, this platform has been developed specifically for the Indian market needs. The company has revealed in the past that it is in the process of readying the production line for the upcoming SUV which will be seen in the showrooms by mid-2021.

The test unit (above) could be seen heavily covered in camouflage hiding away all the exterior design and styling details. In case if the production model resembles the design of the concept, it will come out to be quite a spectacular looking SUV sporting Skoda's signature butterfly grille with multiple twin vertical slats, flanked by sleek LED headlamps.

Previous spy images have indicated that the model will come with roof rails which could be limited to the top-spec variants. Some of the features may include a digital instrument cluster, a sloping centre console, flat-bottom steering wheel, multiple airbags, automatic climate control, ABS with EBD, and more.

The Skoda Vision-IN based SUV is expected to feature a 1.5-litre TSI BS 6-compliant turbocharged petrol engine taken from the Karoq SUV. This engine delivers 150 bhp of maximum power and 250 Nm of peak torque. The transmission option may include a 7-speed DSG gearbox.

Skoda India has trademarked a slew of names including - Konarq, Kliq, Karmiq, Kosmiq, and Kushaq. It is quite a possibility that one of these names could be used to denote the Vision IN concept.